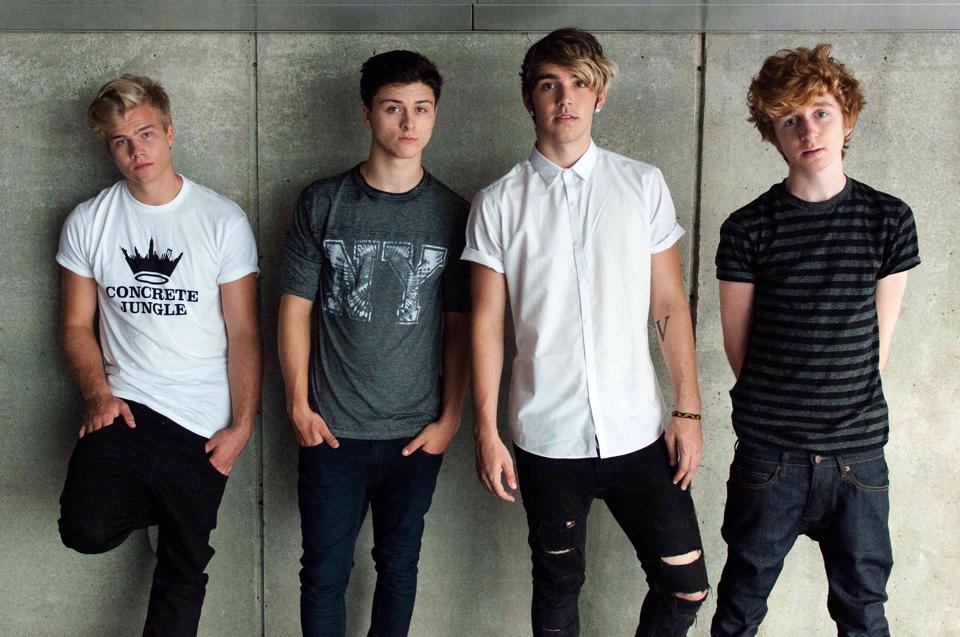 For those who haven’t heard the music Hollywood Ending put out – how best would you describe the group?

To be honest we just mess around and do what we want all day, you’ll probably find us writing/jamming songs or partying in hotel rooms going mental!

What aims do you have for your career going forward?

We aim for world domination and will settle for nothing less! Haha, we just wanna write music, play shows for the people that wanna come hear it and watch us go nuts on stage!

At what point did you realise music was something you wanted to turn into a career?

I’ve always been into music and started writing when I was 14, didn’t really start taking anything seriously until I was about 17… then one day I woke up from this crazy dream and all I wanted to do was write songs! It was almost like this sudden epiphany.

You’re the brother of hugely success James Bourne of McBusted – does he give you career advice at all?

If songwriting was compared to being a Jedi, James is like a Jedi Knight and I am his Padawan… without James i#I would probably be surfing on a beach somewhere selling pancakes!

Where do you draw influence from for your music and as an artist?

Personally I grew up listening to a lot of pop/punk music like Blink-182, Sum 41, Green Day and of course Busted… but at the same time I loved quirkier bands like Wheatus and Smash Mouth – something about 90s music has always stuck with me.

How important is it for you to have creative control over the stuff you produce and put out?

We all write songs in the band, and collectively we all work towards the production of the songs we release. ‘Anywhere’ was a completely independent EP and we wrote and recorded everything on it 100%, except for the Friends theme song cover! We aren’t control freaks or anything, we don’t have a label behind us right now and at the time we didn’t wanna pay anyone to produce us… so we just started doing it ourselves.

Which artists of the present day have got you excited?

A lot of older bands are releasing newer material like Blink and Foo Fighters – always excited about their new releases… McBusted is a big deal for me, and I know the new album sounds AMAZING! Before 5 Seconds of Summer came out there weren’t really any other bands like us emerging and now they are big, I guess it’s paving a path and resurrecting the whole genre, so I’m always looking out for their new stuff!

If you could collaborate with anyone, who would you choose and why?

I’d love to work with all my childhood faves like Blink, I recently got to work with Brendan from Wheatus and it was AWESOME!

What should fans and new listeners expect from you in the coming weeks and months?

Well we have the brand new ‘PUNK A$$ KIDS EP’ coming out this month, and also we just shot a really crazy music video for the single… I CAN’T WAIT TO SEE IT! So you guys should all look out for that. We have some US shows coming up so looking forward to being stateside touring again and seeing all the fans!