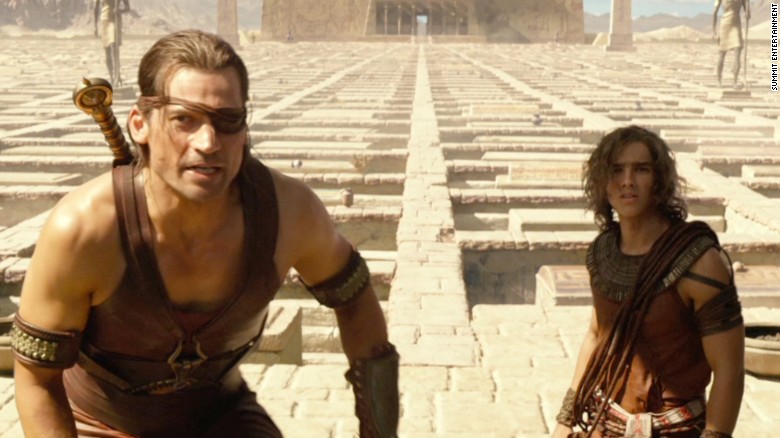 Well, it is Friday, and with another thick slate of movies out this weekend including Eddie the Eagle, Triple 9, and Gods of Egypt, it looks like it’s going to be a big week at the box office. I have already reviewed Eddie the Eagle, so this review is for the new movie from the director of The Crow, Alex Proyas entitled Gods of Egypt. To be completely honest, from the looks of the trailer, I wasn’t crazy excited for Gods of Egypt. It looked like it was filled with CGI, and though I haven’t seen much of the critically acclaimed HBO series Game of Thrones, I wouldn’t have said that the movie has a cast of amazingly talented actors. I did like The Crow, which is probably my favorite movie from Alex Proyas, but that still wasn’t enough to latch me on. Nevertheless, I still love to check out as many movies as possible, so let’s talk about Gods of Egypt. Gods of Egypt is directed by Alex Proyas and stars Brenton Thwaites, Nikolaj Coster-Waldau, Gerard Butler, Élodie Yung, Courtney Eaton, and Chadwick Boseman. It is the story of Bek, a young mortal in love with Zaya played by Courtney Eaton. When Osiris is handing the crown of Egypt to his son Horus, his brother Set played by Gerard Butler arrives at the ceremony and steals the crown while taking Horus’s prized eyes. Set also enslaves the entire nation. With Zaya in danger, Bek attempts to steal Horus’s eyes back so that Horus may defeat the evil Set and claim the throne. A lot happens in this movie, so that is the basic idea of the plot. It gets a little bit difficult to explain with all of the twists and turns, but even after you see the movie it will be tough to take it all in. 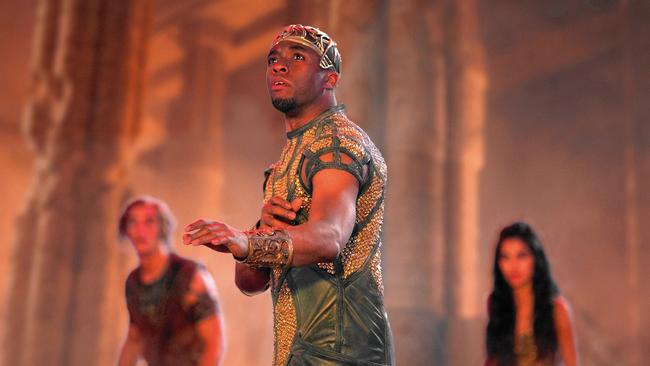 First of all, let’s talk about what I liked about the movie. I thought that it was more entertaining than I expected. Whether it’s entertaining in a good way or a bad way, I wasn’t really expecting this movie to entertain me, but it actually had some entertainment value and was a little bit of fun. Other than that, I did like the character of Bek. Not because he was the most interesting or defined character, but he entertained me. In fact, the mortals in this movie actually impressed me more than the Gods did. That’s one thing that I did not like about the movie. Even though the title is Gods of Egypt, I didn’t buy these godly figures as gods. I bought the fact that they were enormous compare to the mortals, but other than that, they were very unimpressive. Also, the acting in the first half of the movie was pretty subpar. It was nothing to write home about, and it didn’t impress me. For some reason, Gerard Butler is continually allowed to move in and out with accents, and other than when he worked with a very good director in Zack Snyder in 300, he has always fluctuated accents literally from word to word, and the inconsistency is so noticeable. Next, the plot is very messy. It takes so many twists and turns that it almost seems to lose track of itself and forget what is going on within the plot. It has multiple continuity errors that just make for big questions and just seems to make the storyline unsure of what it’s actually going for. Though I shouldn’t be surprised by this, and I’m not, the computer generated imagery of this movie i very noticeable. Fortunately, it didn’t take me too far out of the movie, but it was still very noticeable, and with such a huge budget it seems hard to understand why it didn’t look better. Finally, what was probably my biggest problem with the movie was that it was way too dang long. I went to the bathroom doing the movie, which is something I hate to do because if I’m going to give you my honest opinion on a movie I want to know my stuff inside and out. I thought that for sure  was going to miss a large part of the finale, and when I came back there was still about thirty minutes of the movie to go. Gods of Egypt was a solid thirty minutes longer than it needed to be. This movie was 127 minutes, and if it was 97 minutes I would have had so much more interest in the movie, and I would have had a better idea of what happened in the movie.

Overall, Gods of Egypt is messy and not amazingly made. It has plenty of flaws that hold it back from being a quality film, and it’s absurdly long (127 mins). As I said, it was definitely more entertaining than I expected, but the runtime hurt that so badly, and the movie had me tied by the legs and dragged me to the end credits. Also, at some point a director needs to get one more take without Gerard Butler fluctuating his accent. If you haven’t had a chance, check out 300 because that is where it works, and he has, in my opinion, a very good director in Zack Snyder. I’m not going to say I was disappointed because I wasn’t. I didn’t expect Gods of Egypt to be great, so going in with such low expectations, I was actually pleasantly surprised with how entertaining it was. It wasn’t incredibly entertaining, but definitely more entertaining than I expected. I’m going to give Gods of Egypt a 3.9/10.

Have you had a chance to see Gods of Egypt? If you have, what did you think? Comment down below and let me know! If you haven’t, it was somewhat entertaining, but overall just not that great of a movie. What is your favorite Gerard Butler movie? I haven’t loved a ton of his movies, but I would say that my favorite live-action film with him in a role is 300 while my favorite with him as a voice actor, not that there is much competition, if any, is easily How to Train Your Dragon. So are you headed out to see Gods of Egypt this week? If you are, you can check it out at FatCats Gilbert, the most comfortable theater in the valley. I should have a Throwback Thursday review for Olympus Has Fallen in honor of another Gerard Butler movie coming out this week, London Has Fallen, so be sure to stay tuned for that, and as always, thank you, and keep listening to 88.7 The Pulse!