It is Friday again, and it’s getting pretty warm, but on the bright side, it’s time for another movie review presented by our good friends at Fat Cats Gilbert! Fat Cats Gilbert is the best theater for checking out the latest and greatest hit movies!

On this beautiful Friday we have a few movies coming out including Midnight Special, Miracles from Heaven, and the movie I was lucky enough to be able to see last night, The Divergent Series: Allegiant. I have seen the first installment in this series, Divergent, but I have yet to see the second movie, The Divergent Series: Insurgent. I really liked the first movie, and while I do like the Hunger Games movies, the entire genre of the young adult book-to-film adaptation is kind of wearing on me. I did not like Maze Runner, Twilight, or any of the other generic and similar adapted movies. I wasn’t super excited to see this movie. I did want to see it, but mostly because I do my best to catch every movie I can whether I think I’m going to love it or I think I will not care for it. We are two movies into the series, and I haven’t exactly been hooked yet, so I didn’t think that The Divergent Series: Allegiant would do it, but let’s talk about it!

The Divergent Series: Allegiant is directed by Robert Schwentke and brings back stars Shailene Woodley, Theo James, Ansel Elgort, Miles Teller, and Zoë Kravitz. In the third film in the Divergent series, Tris, Four, and the rest of the group go beyond the walls of Chicago to see what really lies beyond the city. After being surprised by what they find, Tris and Four must decide who is doing the right thing and which side they must take. They try to survive, stay together, and find out who is really standing with them.

First of all, I didn’t come into this movie with crazy high expectations, so I couldn’t be disappointed. I actually did like a couple of things about this movie. I thought that it had some really good science fiction and dystopian world elements. The world is interesting, and it’s really cool to see the technology that has developed inside this world. Next, there are a couple of good scenes. The scene leading out of the opening is a very interesting and well shot scene. It had me entertained, and I thought that the whole scene was fantastic. Next, I still like watching the characters. One thing that I liked about the first movie was the characters. I didn’t really like how the characters interacted because it felt kind of cold and distant, and it still felt that way, but I like watching the characters individually. Miles Teller always has a certain charisma about him, and Four seems like someone who would be valuable to a team such as the one built in these movies as compared to someone who is purely there because he has huge arms and Abercrombie model abs.

Though there were positives, the negatives far outweighed the positives for me. First, the movie is far too predictable. Multiple times in the movie, I didn’t say it out loud, but I basically told myself what was going to happen. I would think, “What if [insert plot point here] happens?” Then, it would actually happen. It was far too common to keep me guessing and completely enthralled. It’s really the same as so many of the young adult book-to-film adaptations, and nothing stands out about it. Next, the writing is very weak. Sometimes it doesn’t make sense, sometimes it isn’t at all interesting or it’s cheesy, and other times it’s Ansel Elgort delivering a cliche one liner. It was almost hard to hear them after a while. They came like body jabs from Mike Tyson, and they hurt. They actually hurt. It’s fair to say that this movie doesn’t show off Ansel Elgort’s acting chops, but I wouldn’t put it all on him. A lot of the fault falls into the writing and direction. Also, a lot of shots had me so confused. They were so pointless and confusing, and they just didn’t belong or serve a purpose. One in particular kind of had me giggling in my recliner, and I had to try my best not to laugh very hard. My next biggest problem with these movies is that the characters seem to slowly loose charisma. Miles Teller’s character is such a tool in these movies, and I don’t like him as a guy, but at least he bring swagger to the table that the rest of the cast can’t even come close to matching. There are a few continuation errors and a few things that the characters do that make no sense, but that’s almost to be expected. 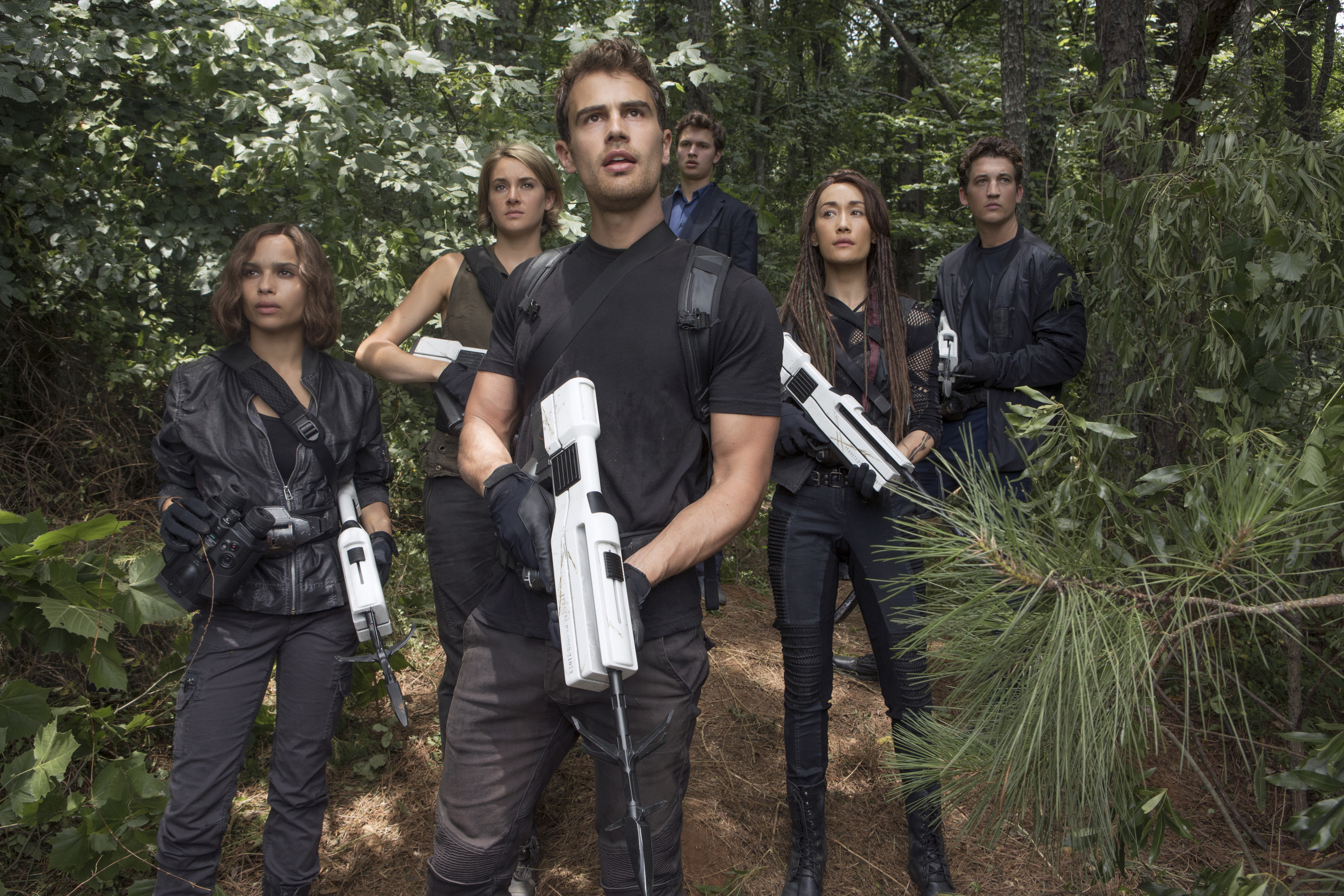 Overall, I did not really like The Divergent Series: Allegiant. It was far too predictable, and it’s just another young adult book-to-film movie that doesn’t make itself different or make itself stand out. While I do like some things about this movie, so many times I found myself attempting to wrap my brain around what was going on. It could have been my fault for not having seen the second film, but it is also due to some of the sloppy storytelling. It’s also not very technically sound, and while some of the dystopian future elements are cool, there are times in the movie where the green screen looks like something I used to do on Photo Booth on an old MacBook. I’m going to give The Divergent Series: Allegiant a 4.4/10.

Have you had a chance to check out The Divergent Series: Allegiant yet? If you have, what did you think? If you haven’t seen it yet and you are going out to see it this weekend, come back and let me know what you think! Like I said, I liked the first movie, but I’ve never been pulled fully into the sequels, but if you enjoyed the first two and you like young adult book-to-film adaptations, you may find yourself enjoying this movie. Also, what is your favorite “YA” movie adaptation series? Mine has to be the Hunger Games series. This week I’m going to try something new. I’m going to try a Top 10 list here, and in honor of a certain blockbuster clash of the two most well-recognized heroes of all time, I will be doing the Top 10 movies based on DC comics. There are a lot of people who aren’t fans of DC movies, but I am definitely a huge fan, so be sure to stick around for that as well as my review of Batman v Superman: Dawn of Justice coming next week! As always, thank you, and keep listening to 88.7 The Pulse!