It is Friday once again which means it’s time for another Pulse movie review presented by our friends over at FatCats Gilbert located on Greenfield and Baseline. It’s such a treat checking movies out at FatCats Gilbert because it is the most comfortable place to see a movie in the valley. They bring food right to your perfectly reclined movie theater seat, and it’s like watching movies in the comfort of your home, but right up on the big screen!

There is really just one big movie coming out this week, and The Huntsman: Winter’s War is the one the Pulse Movie Crew was able to see last night. I have to be honest, this movie wasn’t one I was crazy excited for. I’ll see any movie I haven’t seen just because I don’t like to rely on critic scores to determine how I feel about a movie, but I wasn’t particularly excited for this movie. Even before reviews started coming out I wasn’t psyched, but I’m still glad I got to see it. As a movie fan, my list of favorite working actresses isn’t necessarily topped by the expected Cate Blanchett and Meryl Streep. Three of the actresses in this movie are among my favorite working actresses. They might all be in my top 5, and those are: Emily Blunt, Charlize Theron, and Jessica Chastain. I love all three of them so much, but my first thought was a question to the higher beings of the casting world. Why do three of my favorite actresses finally come together for a movie, and it’s The Huntsman: Winter’s War? I didn’t like the first film, so I figured it was just dumb luck. Usually when my favorite actors all come together I really enjoy the movie. It has made for some of my favorite movies of all time such as The Departed, Ocean’s Eleven, Pulp Fiction, and last year’s The Big Short. The Departed and Pulp Fiction are two movies that are probably in my top twenty five favorite movies of all time, so I get a little bit excited when I see my favorite actors and actresses in one movie, but I had to wonder why it had to be this. Anyways, let’s talk about The Huntsman: Winter’s War. 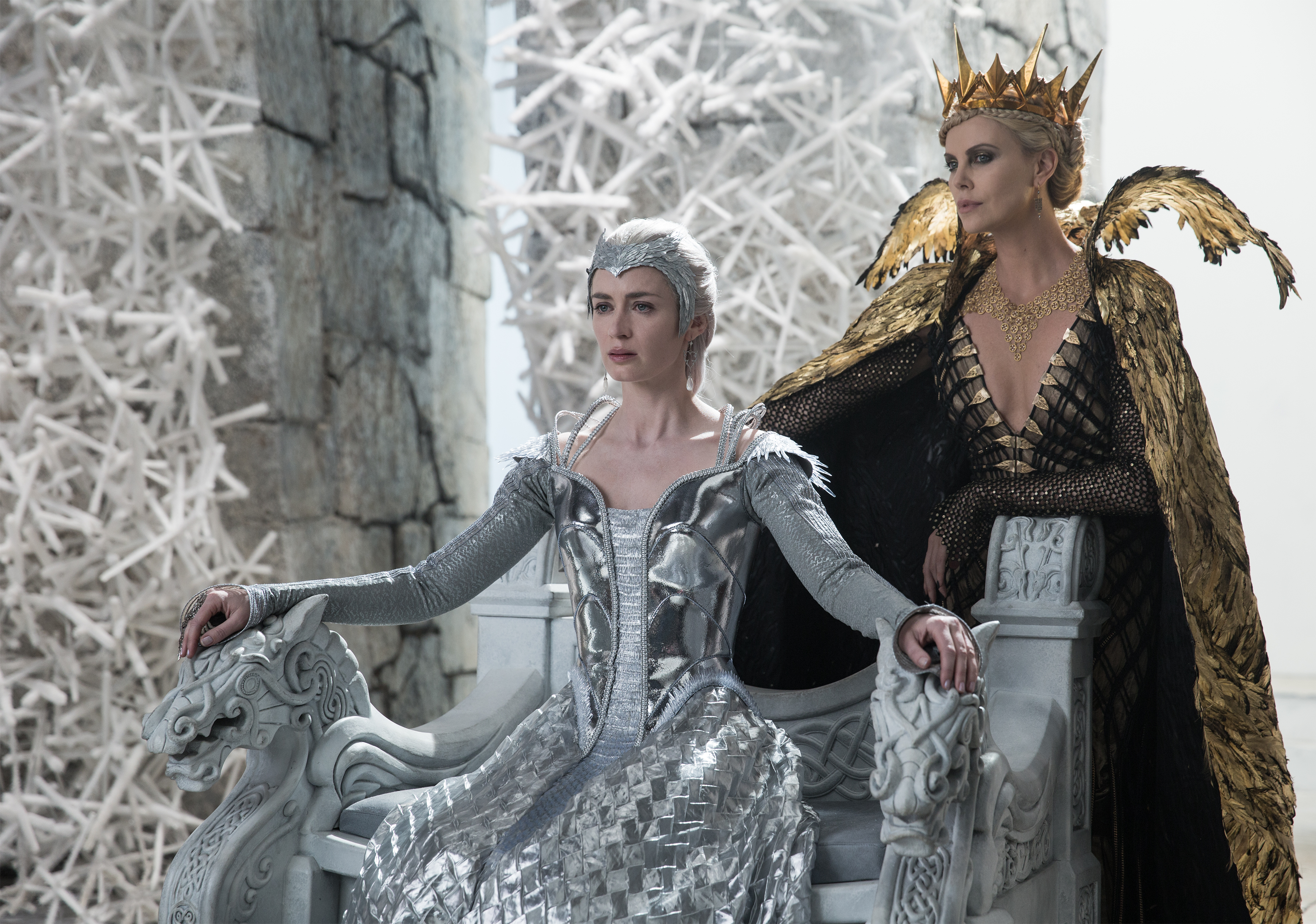 The Huntsman: Winter’s War is directed by Cedric Nicolas-Troyan and stars Chris Hemsworth, Jessica Chastain, Emily Blunt, and Charlize Theron. In a prequel to Snow White and the Huntsman, after Queen Freya, played by Emily Blunt, is betrayed by her sister, played by Charlize Theron, she decides to banish love from her kingdom and her soldiers, the huntsmen. After Eric, played by Hemsworth, and Sara, played by Jessica Chastain, attempt to defy that rule. When Freya finds out that the two are in love, she does her best to separate them which sends them into singular journeys on their way back to each other. 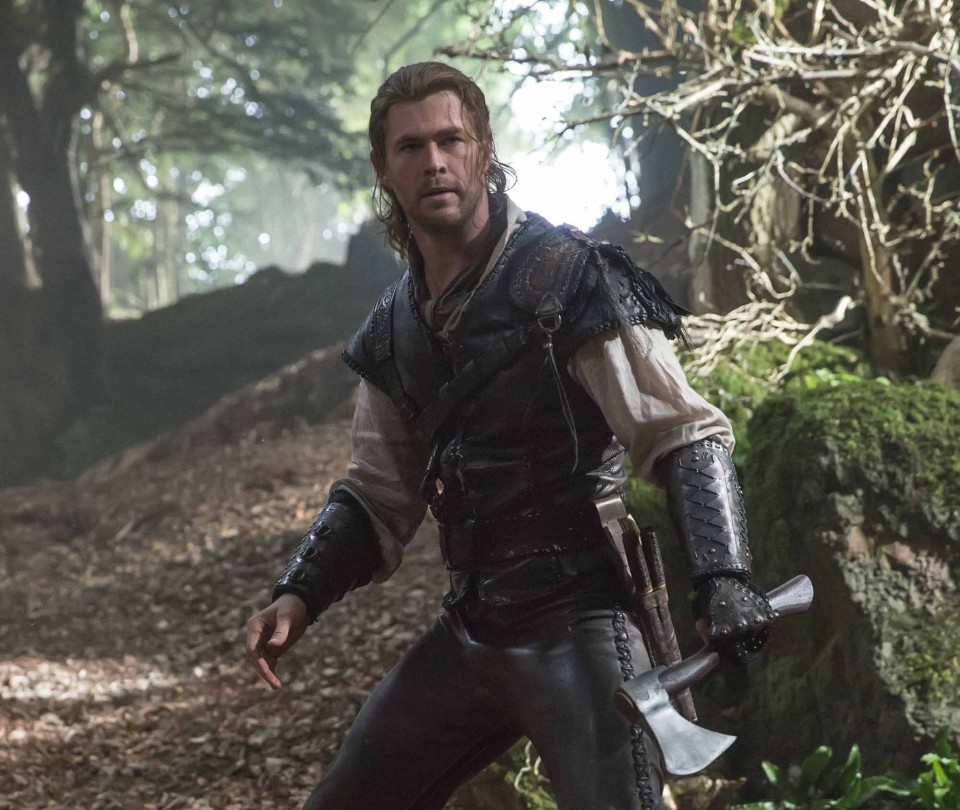 As always, let’s start with the positives of the movie. First of all, I liked the dwarves. Sometimes the movie took itself much to serious, but the dwarves brought a little bit of enjoyability and relief to what is a pretty boring story otherwise. They were pretty entertaining, and Nick Frost is half of one of my favorite comedy duos. Nick Frost and Simon Pegg, in my mind, are on the same comedic genius level as Will Ferrell and John C. Reilly or Seth Rogen and James Franco. In fact, if I were to take a look at overall filmography, they may be my favorite or my second favorite comedic duo. I love watching them, and though Simon Pegg is not in this film, Nick Frost continues to excel and is probably the best part of this movie. Also, I liked the banter between Chris Hemsworth and the dwarves. It wasn’t amazing, but again, it was a nice withdraw from the film’s narrative. I also thought that Chris Hemsworth and Jessica Chastain worked very well together in this movie. I bought them for the most part, and they were another aspect of the film I actually did enjoy. Behind their below average Scottish accents, I bought their relationship and though they weren’t bursting with charisma, they had okay chemistry. 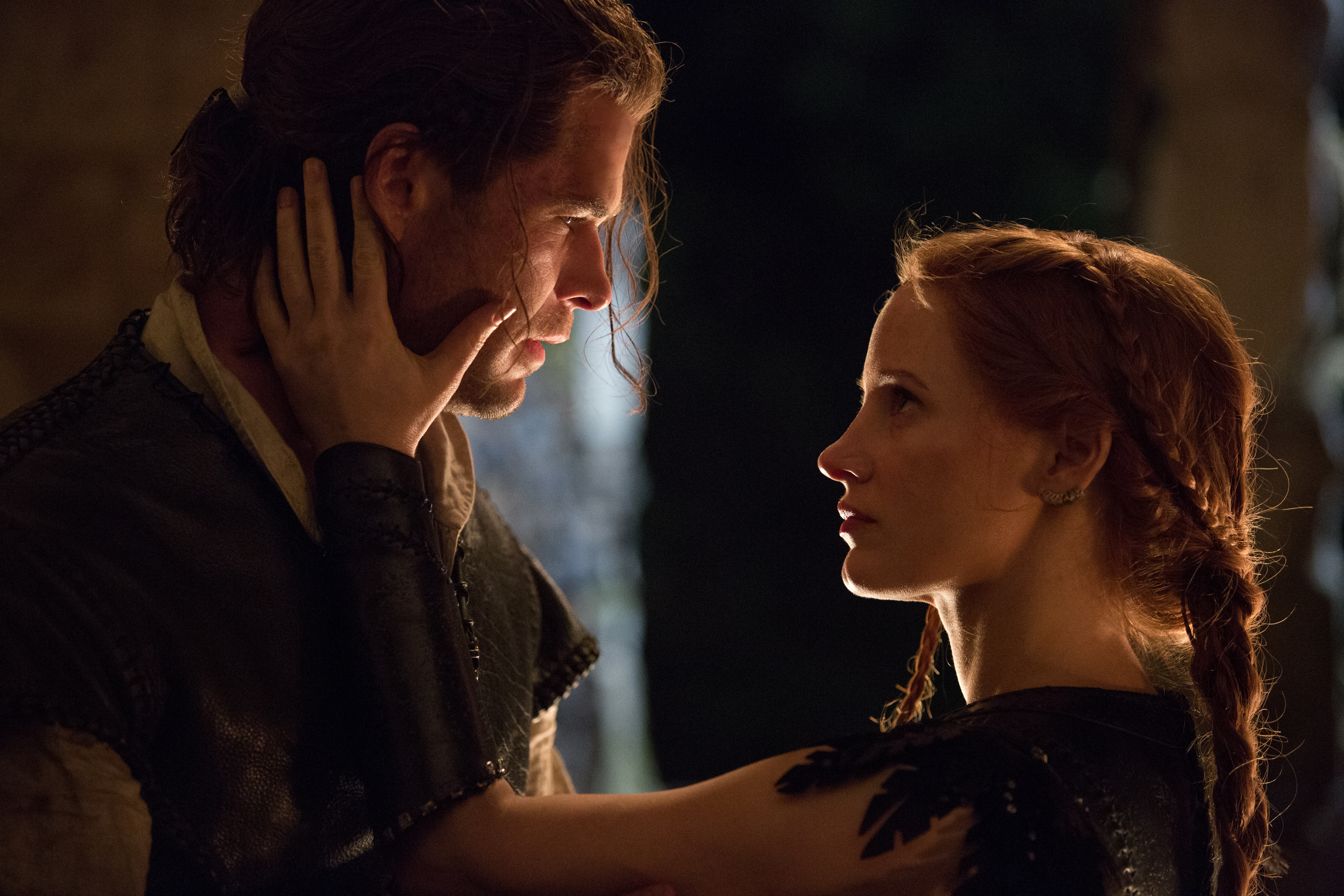 Unfortunately, we do, as almost always, have to address the negatives. As I mentioned before, this movie had three of my favorite working actresses in the business as the leads. I can’t even tell you how much I love Emily Blunt, Charlize Theron, and Jessica Chastain. Emily Blunt has a Golden Globe, and she will, and I mean will, eventually be nominated for an Oscar. Jessica Chasten has already been nominated for an Oscar twice, and she has been in so many movies I have adored. Finally, Charlize Theron has an Oscar for her role in 2003’s Monster. These are all esteemed actresses, but holy moly. They were not good in this movie. I never thought that I would say that I can see Emily Blunt winning a Razzie before an Oscar, but after this movie, I think it’s possible. I don’t want to say it because I think that they are all masters of their craft, but my three favorite actresses were bad in this movie. I think that they were all very weak, and it really made me sad. It has a little bit to do with direction, as the movie was very poorly directed, but it also has to do with a below average screenplay. I wouldn’t say that those were the main problems with the movie, but it was poorly directed and had what may be the worst performances I’ve seen from a few of these actors. I also did not like the story. It doesn’t make sense, and it is so out of left field sometimes that it just didn’t grab me. I checked my phone for the time so many times in this movie, and I don’t typically check my phone in movies. I almost couldn’t wait for it to get on to the next scene or get on to the end credits. It’s just not a very good movie with a plot that doesn’t make sense, and some laughable shots. There is a shot early in the film where a kid is whacking a straw person with a stick and yelling, and I don’t know why, but I laughed very hard. I was so confused because it was almost as confusing and unnecessary as the movie itself.

Overall, The Huntsman: Winter’s War is just not a good movie. It had its bright spot, and it was Nick Frost. Other than Frost, the movie was just not enjoyable, and it was very poorly made. I don’t like to write bad reviews on movies, but this movie is not well made, not enjoyable (other than Nick Frost), and unnecessary. I feel like that perfectly describes how I feel about this movie, so I’m going to give The Huntsman: Winter’s War a 3/10.

Have you had a chance to check out The Huntsman: Winter’s War yet? If you have, what did you think? Comment down below and let me know! If not, will you be headed out to the theater this weekend to check it out? It’s playing with our friends over at FatCats Gilbert, so if you want to see it in style you can click right here to see showtimes and ticket information. I should have a movie review next Friday, but unfortunately I can’t promise which movie it will be for. I can promise there will be one, so stay tuned for that, and as always, thank you, and keep listening to 88.7 The Pulse!