On this beautiful summer day in the season of blockbusters, it’s time for another movie review presented by FatCats Gilbert on the southwest corner of Greenfield and Baseline. FatCats Gilbert is the best place to check out the latest releases at the box office or even to bowl a few frames with your best friends! There are a couple of movies out this week with Disney’s newest Pixar film, Finding Dory, and a movie introducing what could be the best new comedy duo of Kevin Hart and Dwayne Johnson, Central Intelligence. I got the chance to check out Central Intelligence, so I’m going to review this one first! First off, I have to say that when I first heard about this movie, my excitement sat right in the middle. As much of a comedic genius as I think Kevin Hart is, I don’t think that he has carried a good movie yet. I say “yet” in hopes that Central Intelligence and his future movies finally find him hitting his stride. He does have The Secret Life of Pets coming out July 8th, so he has two chances this year! I also think that The Rock is the most charismatic guy in Hollywood, and I really don’t think you can go wrong with him in a lead role, so I am always excited to see him on the big screen. Anyways, let’s talk movies!

Central Intelligence is directed by Rawson Marshall Thurber and stars Dwayne Johnson, Kevin Hart, Danielle Nicolet, and Amy Ryan. After twenty years of reality setting in following high school, Calvin Joyner, played by Kevin Hart, has still not accepted his desk job as an accountant. He was the most popular and most likely to be on the road to greatness in his high school, but somewhere it all went wrong. One day on Facebook, he runs into an old classmate named Bob Stone, played by Dwayne Johnson, who was subjected to a good amount of bullying in school. When the tides have turned and now Bob is the cool, in-shape, likable guy, he and Calvin team up to prevent the end of life as we know it.

I think this goes without saying, but any time you have The Rock in a movie, that’s plus. It’s a huge plus. He is just so charismatic and so likable that it’s so difficult to not at least enjoy yourself when watching him on the screen. Another thing that Central Intelligence has going for it is that Johnson could have chemistry with a grain of sand. He and Kevin Hart have such great chemistry, and some of the banter they have in this movie actually works really well from an entertainment and comedic viewpoint. I think that the mind behind the screenplay, Ike Barinholtz, who is in Neighbors and The Mindy Project, is genuinely very funny, and there are multiple times in this movie where the one-liners hit right home! I also have to praise this movie for its self-awareness. This movie pretty much acknowledges that it’s quite absurd, and it uses its actors and actresses to its strength to create comedy from nothing. I also like how this movie doesn’t directly take the route of a movie like 21 Jump Street where the underdog meets the nemesis then the two become best friends. These two don’t have a bad history. They actually have a good history, and we see how one character gives another hope. 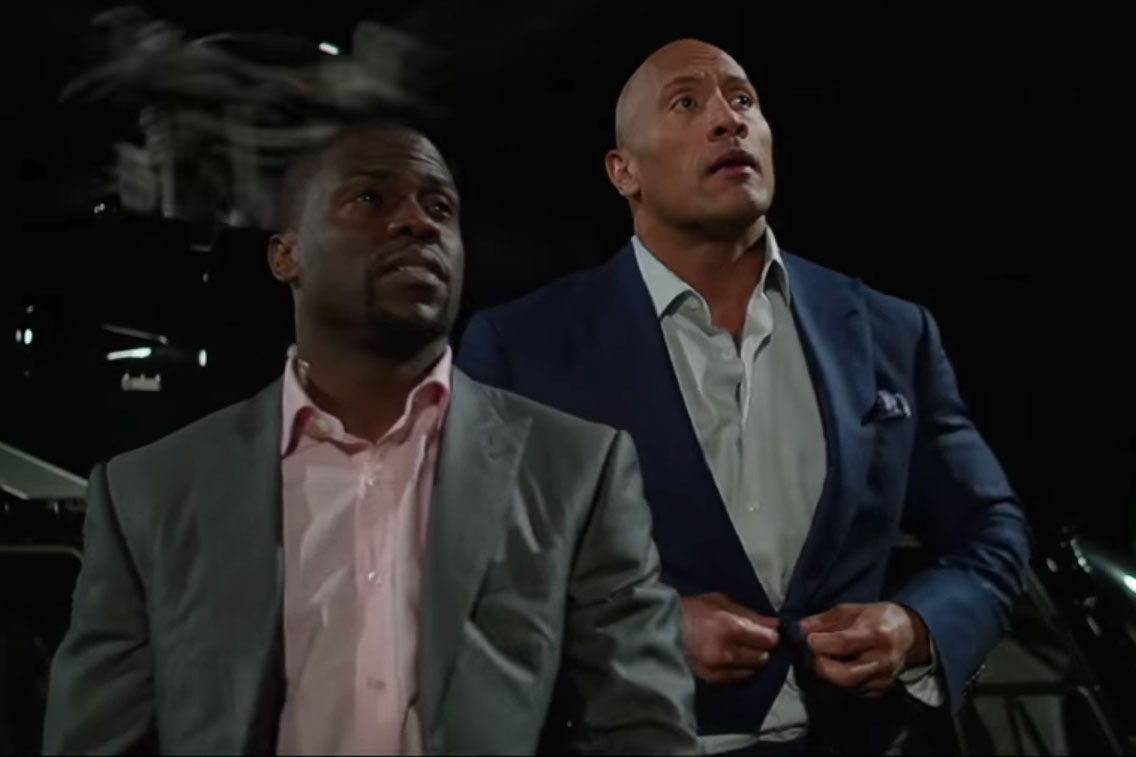 This movie is a little bit of fun, but it also has a few problems. First of all, it’s nothing we haven’t seen before, and it kind of uses its strengths as a backbone to distract from its weaknesses. They use The Rock’s natural likability and Kevin Hart’s natural comedic chops, but after that, this movie is pretty textbook, and the only reason it isn’t as predictable as it could be is because it is pretty of all over the place. It’s an interesting concept, but by the end it gets hard to make heads or tails of anything, and you just kind of question what has happened. If it is absolutely necessary to you that everything makes sense by the end of the movie, I wouldn’t say that Central Intelligence is for you. Also, like I said, it is very “by-the-book,” and that kind of just makes this movie fit in with the crowd. This isn’t a movie you are going to remember in about a week. You may just get through the movie with a somewhat fun time given to you by Dwayne Johnson, but then you will never want to see it again. I usually look for replay value in movies because I love to revisit great movies. My movie collection is one of my favorite possessions, so with this movie being very generic and unmemorable, it’s tough for me to call this a great movie, in my opinion. A lot of the jokes actually really missed for me, and a few of them I was actually kind of surprised about. I feel like the movie pushed its PG-13 rating to its last straw, and it didn’t make the movie better.

Overall, this movie is a little bit of fun, but that’s really it. The Rock is always a plus. If you want your movie to have at least one plus, cast The Rock because I don’t think that I could ever dislike him. I thought that Kevin Hart had a few well delivered lines, but Central Intelligence is very unmemorable, and a lot of the jokes missed. I didn’t laugh as much as I wanted to, and I really wanted to have such an awesome time with this movie, but I just didn’t have as much fun with it as I wanted to. I’m going to give Central Intelligence a 4.5/10.

Will you be headed out to see Central Intelligence this weekend? If you will, let me know down in the comments! Finding Dory will also be hitting theaters this weekend, so if you are going out to see that this weekend, let me know about that as well! I love Finding Nemo, and even though I am not someone who thinks that Finding Nemo is the best Pixar film, I still love it, so I can’t wait to check Finding Dory out and talk about it! I should have my review for Finding Dory up on Friday, so be sure to stick around for that, and as always, thank you, and keep listening to 88.7 The Pulse!

'Finding Dory' could be Pixar's biggest opening of all time