It’s time for another movie review presented by our good friends over at FatCats Gilbert on the southwest corner of Greenfield and Baseline! FatCats Gilbert is the best place to see the biggest box office releases with food brought right to your seat!

I’m writing this on the 28th of January which means that January is finally almost over. All movie fans know that January makes it tough. It’s tough to be a movie fan right now, and I was expecting the seventh installment of this franchise to prove that. I have seen all of the Resident Evil movies once, and I’ve played some of the games on my phone, so I get the idea, but I’ve never been a huge fan of the movies. Let’s get right into the review!

Resident Evil: The Final Chapter is directed by Paul W.S. Anderson and stars Milla Jovovich, Iain Glen, Ali Larter, Shawn Roberts, Ruby Rose, and Fraser James. This is the part where I usually give a little bit of a synopsis, but I can’t piece everything together in Resident Evil: The Final Chapter. I’ll tell you what I do know. Alice, played by Jovovich, is leading the final battle against the evil Umbrella Corporation. In her final adventure, she needs to find the antidote for the disease that has taken over the world and take down the company that turned the planet into a wasteland.

Before the movie, Paul W.S. Anderson and Milla Jovovich come on-screen and thank everyone for attending the film and going to see movies in general. We also see a few clips of the movie before we start, and it’s actually kind of a nice moment. It’s nice that they thanked everybody for coming because with the advancement of technology and the Internet, there are definitely more options. So I’ll mention that I appreciate that little message. What I will say is that they should have read a roller coaster warning sign. Do you know the signs that say future mothers, people with aches and pains, motion sickness, or people with reactions to fast-paced changes and light should probably avoid the ride? Anderson and Jovovich probably should have told us that because the rest of the film feels like your neck is being snapped. I don’t like to jump on movies and bash them because they’re difficult to make. They take time, care, effort, passion, a message, a goal, and lots and lots of money. More money than most of us will ever come in contact with in our lifetime. I want every movie to be good, but if I didn’t tell you why I thought this movie was atrocious, I wouldn’t be doing my job. First of all, did Paul W.S. Anderson direct this movie? Who produced this movie? Who oversaw the production and decided that this was coherent enough to show others? My, oh my, this movie is extremely poorly directed, and it’s extremely poorly edited. I truly think that the average shot might have lasted 10 frames. Keep in mind, movies are shot at 30 frames per second. That means that every third of a second, we’re getting a cut. That sounds like the origin story of a headache. It’s not even like it’s fast-paced, thrill-seeking, action-packed editing. It’s just cut after cut with highly contrasting colors and lighting, and it made my entire body ache. There’s a sequence in this film where this undead thing is running at our main character, and there are at least 40 cuts in about twelve seconds where we go back and forth from this vague shape of some zombie creature and the main character who is shooting at it. Take a little ride with me and forget science on this one. Imagine if the sun was five hundred feet away from your face (again, we forgot about science, so you’re surviving this. This is a Magic School Bus type fantasy) and you opened and closed your eyes forty times or more in roughly ten seconds. Your eyes would be on fire, literally and figuratively. This is one of the few times I can remember turning away from the screen, not because what was on it was incredibly graphic, not because what was on the screen made me uncomfortable, and not because I was expecting a jump scare, but because what was on the screen physically pained me. Like I said when I mentioned the roller coaster warning, if you struggle with shifts in lighting or motion, I’m not even joking when I say that this might make you feel like you’re having a neurological problem. Next, let’s talk about the jump scares, because who doesn’t love those? Why were they in this movie? In the same way I wanted Underworld: Blood Wars to be a disposable action movie, I wanted this to be a fun video game movie. I know Paul W.S. Anderson has it inside him because he showed that he could give us fun, enjoyable, flick-your-brain-off action in Mortal Kombat. They decided to go the jump scare route in this one, and none of them work. The score, which might be okay on its own, fades out, then a zombie jumps out at you with a sound that surprisingly doesn’t blow the thousands of dollars worth of sound systems in theaters. There’s even one where the music fades out, then Alice quickly turns around while a loud, distorted sound comes out of nowhere. There’s no danger, no visual to go with it, and no payoff. It’s just a loud noise directly following silence. We go on with that for, I don’t know, THE REST OF THE MOVIE. 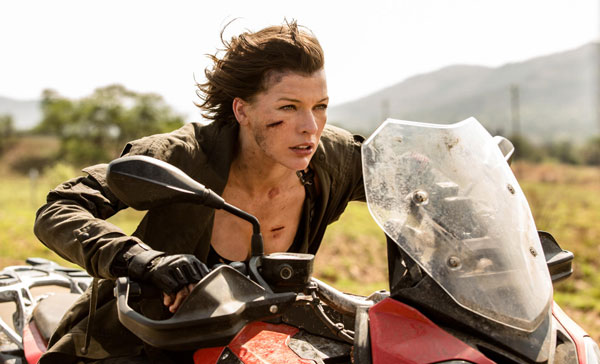 At this point, I just want fun action from video game movies. This movie didn’t even give me that. The action in this movie is so poorly shot, choreographed, directed, and edited that I couldn’t even enjoy my time watching Milla Jovovich rip some zombies apart. It became boring and painful. You could probably go on YouTube and see better zombie action scenes made with beginner computer programs. The thing is, this movie was made for $40 million. That’s a lot of money to spend to not be able to get a coherent action sequence together. This movie is probably going to make its budget back, but that’s not my point. I don’t know where the $40 million went. I would bet that about $50 went to a low-level visual effects program because they look absolutely horrendous for a $40 million movie. They weren’t doing anything too complicated. They needed some makeup, some VFX makeup, and some explosions. They look like they were created on Paul W.S. Anderson’s iPhone. Also, this cast is awful in this movie. I almost feel bad for Milla Jovovich because I feel like she has had it with this franchise. She looks tired of doing this, and hilariously enough, her character feels like she’s begging to have everything end by the finale of the film. Her character wants this franchise to be over as bad as I do, and I can’t blame her. Let’s talk about the characters. I can’t remember their names. The performances didn’t help, but it’s not like the director, screenwriter, or producers were focusing on developing people I cared about. Every single moment that isn’t an action scene that made me feel like I was being slapped in the face was a terrible video game cut scene with video game cut scene animations. We would see an exposition scene, then it would pan out while electronic symbols came on the screen and tracked the characters’ journey like we were watching it unfold on a digital map. Our main character meets up with a group of survivalist humans along the way, and this group is supposed to help her get into the Umbrella Corporation headquarters. Well, I didn’t care about anybody for long enough to hope that they didn’t get eaten by zombie dogs or sucked into a giant fan or crushed by a wall that is closing in. I simply did not care. It also tries to keep revealing things about the main villain that should keep the audience interested and on the edge of their seat, but as far as the villains go, we have one mechanical clone and one guy who looks like a Ken doll. From facial features even down to realistic appeal, he doesn’t look like a person. If you made a Barbie-esque doll out of The Terminator, you would have the secondary villain in this film, only you won’t remember him the way you remember The Terminator. One of the funniest things about Resident Evil: The Final Chapter is that by the end, it tries to have an emotional reveal with an emotional ending and a powerful message about humanity and blah, blah, blah. We’re in minute number one hundred six. You lost me one hundred five minutes ago, and you just wasted my time by making the entire story even more nonsensical than it already was.

Overall, this franchise needs to go away. It needs to go into deep, dark hole and never climb out because somehow it has topped itself. This might be the worst movie in the franchise, and I would have trouble finding a more annoying film. This movie should have had warnings in the front of it. “WARNING: This movie is so awfully and unskillfully edited and directed that it will literally cause physical pain to your eyeballs and ear drums. If you have experienced neurological problems in the past, please avoid!” I have never had a seizure, and I am thankful for that. I am not trying to poke fun at or downplay seizures, but I have to imagine this is the closest I have been having a seizure. My senses actually felt like they were being attacked, and it’s not pleasant. That says more than anything I could say about how horrendous and illogical this story is. The entire movie is like a bad video game cut scene, and I truly wonder what happened. Stay tuned to see this one in the “Worst Movies of 2017” list later this year. The one positive I can pull out of this movie is that you may want to check it out just to see how everything concludes if you’re a fan of the series. Other than that, I have nothing. I’m going to give Resident Evil: The Final Chapter a 0/10.

This is actually the first movie I’ve ever given a score of 0/10 despite the fact that four movies would have earned that score last year had I written reviews for them. This movie makes the 2017 Razzie nominees look like the love-children of Citizen Kane and Schindler’s List. Are you going to see Resident Evil: The Final Chapter? In the same way that you bring Junior Mints to your average flick, you might want to stop and grab some Ibuprofen on the way to this one for when the credits finally roll and you realize that you may need to get your vision checked. January is over, folks. We made it. As always, thank you, and keep listening to 88.7 The Pulse!