It’s time for another movie review presented by our good friends over at FatCats Gilbert on the southwest corner of Greenfield and Baseline. FatCats Gilbert is the best place to see all of the latest box office monsters including Power Rangers, Beauty and the Beast, The LEGO Batman Movie, and the brand new releases this weekend The Boss Baby and Ghost in the Shell! To see all showtimes and to purchase tickets you can click right HERE! 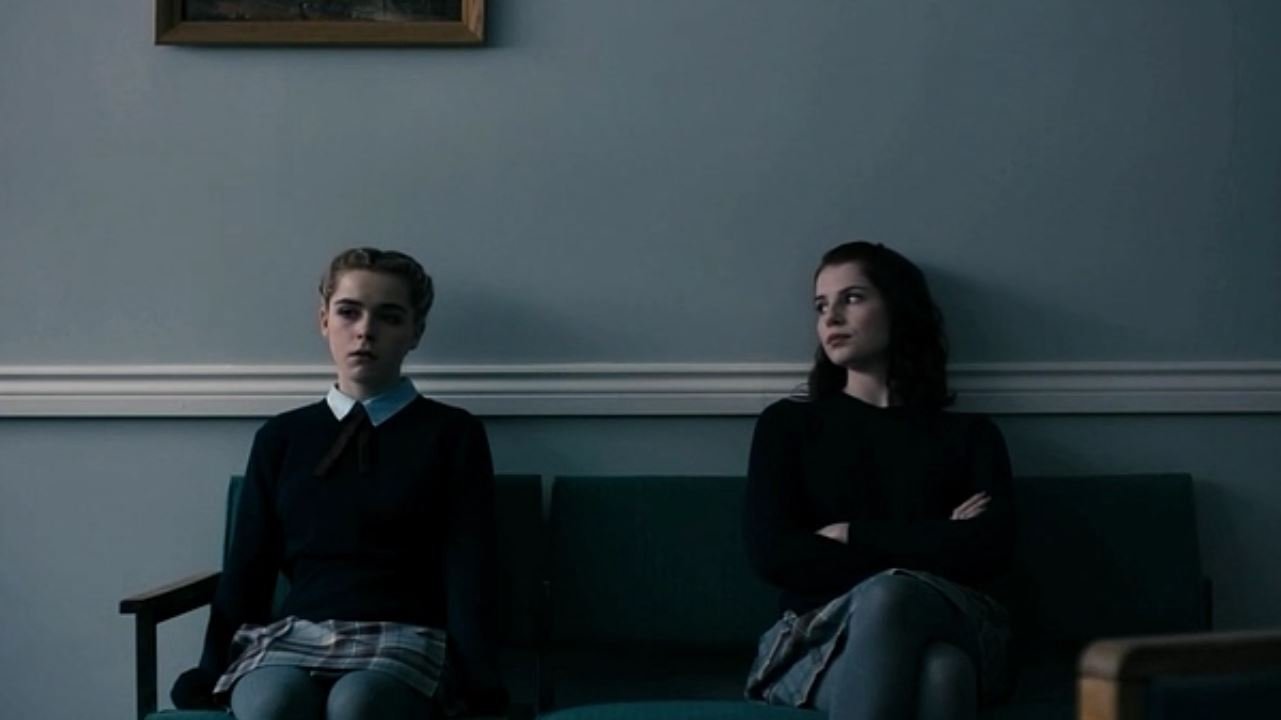 A24 is back at it this year with their first release in The Blackcoat’s Daughter! I’ll always say that if I have any holes in my movie-watching, it’s horror. I’m not a huge horror fan. In fact, I barely explored horror until I started writing reviews, so I’m working on becoming well-versed in the genre, and I’m coming around to it more and more as I watch more. What I love about indie horror is that there is a lot of practicality to it. Indie horror doesn’t get to rely on a giant budget to create VFX monsters and demons, so creativity, directing, and editing typically all have to be top-notch. Let’s see if they are! 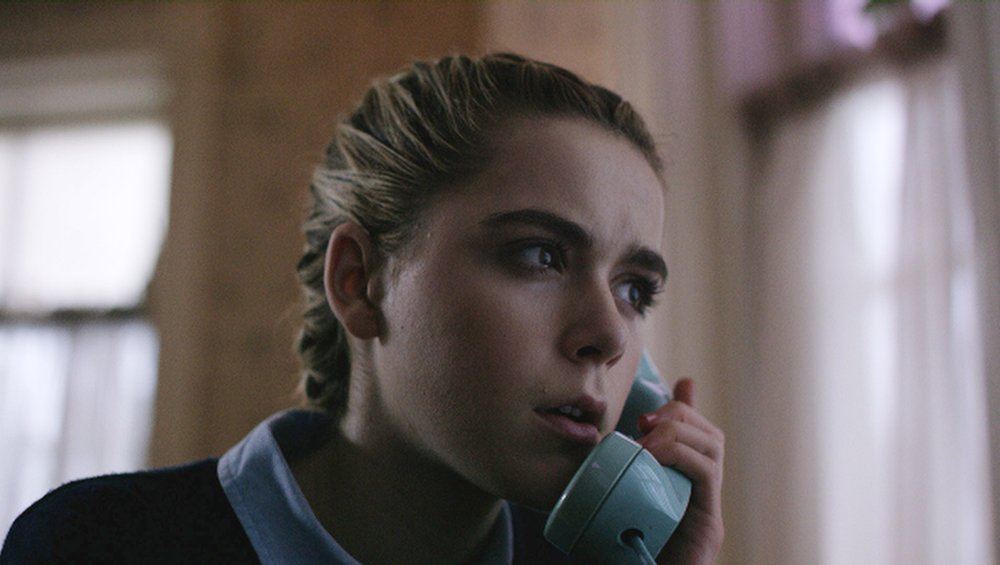 The Blackcoat’s Daughter is directed by Oz Perkins and stars Kiernan Shipka, Lucy Boynton, Emma Roberts, James Remar, and Lauren Holly. It’s an icy winter break at one of the most prestigious boarding schools, and two of the students have been left behind when neither of their parents come to pick them up. On the other side of the coin, a man finds a girl sitting at a train stop in the bitter cold and decides to pick her up and help her, much to the displeasure of his wife. The two different stories are intertwined as a demonic force looms over every single character. 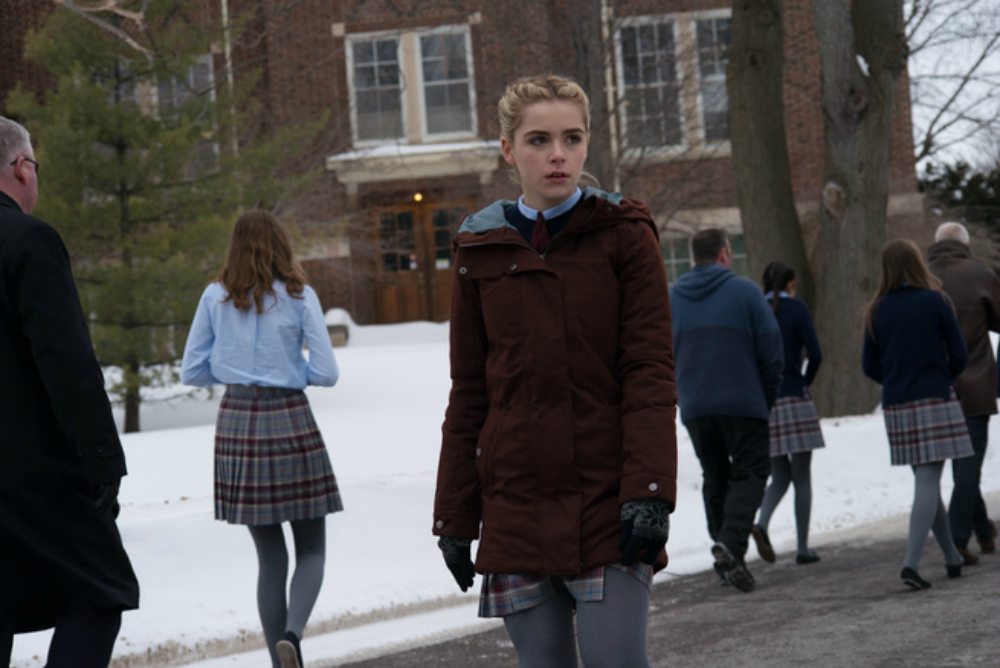 I mentioned that the directing and editing are typically front and center in a horror movie, and The Blackcoat’s Daughter is no different. This a very differently made horror film, and I have to appreciate that. I’d go as far as saying that this is more of a thriller than a horror film. Oz Perkins puts a pit in your stomach by creating an absolutely incredible atmosphere. In the same way that evil always lurks around the corner of the story, it feels like evil is sitting right next to you while watching the film. The building of tension and the way I felt like I had to hold my breath worked so well, and I was so pleased with what I was given from a psychological and horror standpoint. I was about to be driven crazy watching the slow burn unfold, and I loved that. Next, there are really great performances from just about everyone in the film. Kiernan Shipka was the lead, and I’m not too familiar with her, but she was great! Great characters are often built through what they do and what they leave unsaid as compared to what actually comes out of their mouths. It’s pretty common knowledge that tone and body language is far more effective in communication than actual words, and Shipka pulled off the perfect tone and body language in her role. It wasn’t what she said that creeped me out; it was how she said it and the connotation of her tone. The uncertainty that her mannerisms gave her words was terrifying, and that aspect worked well for the tone and general feeling of unease the film gave me. I was also happy to see Lucy Boynton give a great performance. After seeing her in Sing Street, I’m always going to expect great things, and again, her actions spoke far louder than her words. We spend a lot of time learning through her point of view, and we feel the horror that she feels. Her reactions mirror those of a normal person, so we can connect to her through her panic. Emma Roberts was also really good. She might say about seven words throughout the entire runtime, but the way her scenes are structured, directed, and cut together are so fascinating and mystifying that I was sucked in. I also have to say that I love that The Blackcoat’s Daughter was only about an hour and a half long. I don’t mind long movies, but The Blackcoat’s Daughter comes in, does what it’s trying to do, then gets out, and with the different editing style and direction, my eyes were usually glued to the screen. I did have a couple of problems with the film, and it’s mostly surrounding the story. While it’s genuinely disturbing, I couldn’t help but be a bit disappointed by both the build up and the payoff once I realized where everything was going. Even during the film where I was closely following along, I liked what I was seeing, but I really wondered where it was going. It didn’t feel like it was going anywhere, so I was waiting for a great payoff that proved me wrong, but I didn’t get that. By time it was all said and done, I didn’t have a sense of accomplishment other than seeing the film and having a good time with a spooky slow burn. I also mentioned that the finale disappointed me. On top of the fact that it didn’t give me a sense of depth, I didn’t buy it. We’re swimming in spoiler territory, so I won’t go much further, but I’ll say that I didn’t buy into it once the final reveal was made. Apparently there is a clip out there that spoils the finale. Don’t watch any clips or trailers if you’re going to watch The Blackcoat’s Daughter. If you know what happens at the end, you might walk away feeling like you wasted an hour and a half because you didn’t go anywhere. Finally, this is kind of a nit-pick in a film like this, but there are some B-movie scares toward the finale that took away from the dark atmosphere and relieved some of the constant tension. Overall, I enjoyed The Blackcoat’s Daughter because Oz Perkins proved to be a very different director. He does a great job with the pacing of a slow burn as well as establishing an atmosphere of pure fire and tension. The best part of the film was the atmospheric and psychological terror of the slightest possibility that this situation could occur. We see ourselves through Lucy Boynton taking a cautious approach, yet still trying to give the benefit of the doubt until the dam breaks. Every performance is really great, and the actions speak louder than any piece of dialogue in the film does. The story does feel underwhelming especially once the reveal is made, and there are a few B-movie scares, but for a horror movie that I had the chance to watch late at night with the lights off all by myself, it gave me a big enough pit in my stomach and had a disturbing enough world build for me to say that it’s worth dedicating the 95 minutes to. I’m going to give The Blackcoat’s Daughter a 6.7/10. 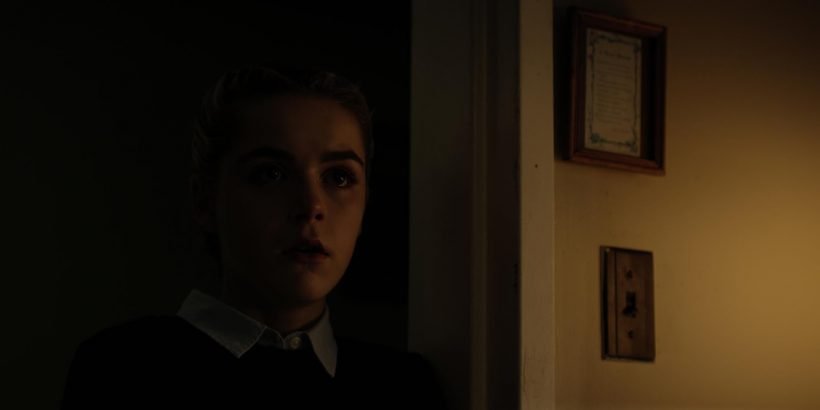 Will you be seeing The Blackcoat’s Daughter? Comment down in the comment section and let me know! As always, thank you, and keep listening to 88.7 The Pulse!