It’s time for another movie review presented by our good friends over at FatCats Gilbert on the southwest corner of Greenfield and Baseline! FatCats Gilbert is the best place to see all of the latest movies at the box office in the comfort of your own recliner!

Every year I sit down and wonder what will be the comedy of the year. I had to think that Baywatch had a good shot. From the trailers, it appeared to be self-aware take on an older television show with an R-rated twist, which is essentially the 21 Jump Street approach. I love 21 Jump Street, so I couldn’t help but be excited for Baywatch. I never watched the show, but anytime we have a raunchy comedy, I get ready to laugh. I also love Dwayne Johnson, and I’m actually a Zac Efron fan. Maybe he doesn’t hook onto the greatest roles, but he has acting chops. Let’s talk about Baywatch!

Baywatch is directed by Seth Gordon and stars Dwayne Johnson, Zac Efron, Priyanka Chopra, Alexandra Daddario, Kelly Rohrbach, Ilfenesh Hadera, and Jon Bass. Drugs and dead bodies start to wash up on a bay watched by the finest lifeguards in the world. Being a lifeguard doesn’t just mean that you can move fast in the water. It means that if you blink, you might miss an opportunity to save a life. Nobody knows this better than Mitch Buchanan, played by Johnson, who wants to get to the bottom of this drug and murder case. With his loyal crew and three newcomers, he decides to go beyond his jurisdiction and take down the scum dirtying up his beach. 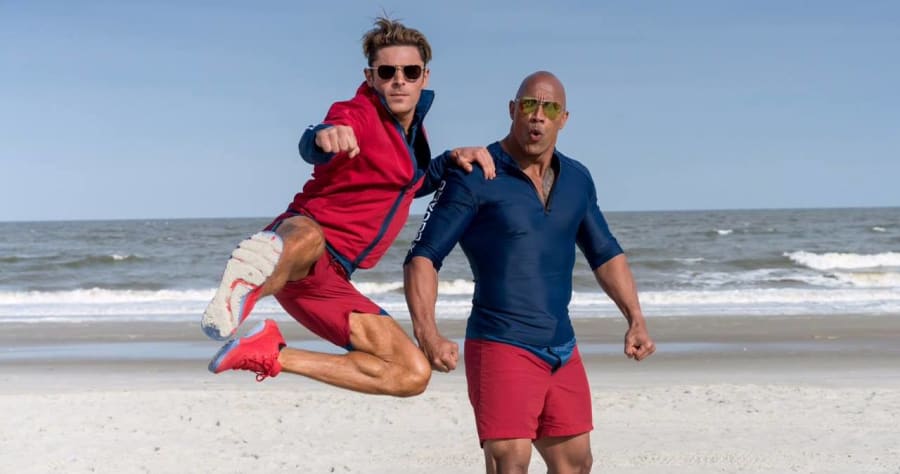 I’m not busting barriers open to say that I always want to laugh in comedies. I love to laugh, so I try to be open to jokes and let the comedy and atmosphere suck me in. I thought Baywatch did a decent job of giving me the laughs I wanted. There are some great jokes and gags in this movie that I really believe will go down as some of the best R-rated bits in comedy history. When I say R-rated, I really mean R-rated. Some of these jokes, one in particular, really pushes the envelope, and though it’s not something I’d watch for the graphicness, it still made me laugh to see the characters in the situation. Though I ended up getting laughs out of Baywatch, I think that the best thing about the movie was the cast and the cast chemistry. Dwayne Johnson and Zac Efron have excellent chemistry, and they were both magnetic on-screen. They countered each other so well, but they also showed that they both had their hearts in the same place when push came to shove. Zac Efron proved he has the comedy and the acting chops to hang around with a charisma king like Dwayne Johnson, and Johnson basically makes magical chemistry with anyone he’s put on-screen with. Finally, I have to appreciate the self-awareness this movie presents. It’s not going to be the intelligent, story-driven comedy that is praised for years to come, but it knows that. It knows that it’s a movie you would randomly find on a streaming service and decide to watch with your friends at the beginning of the summer. Most everything that occurs is flat-out ridiculous and dumb, but I didn’t have a problem with unbelievability because it never establishes a realistic world. It establishes a world of ridiculousness, then it stays in that world.

Though it knows what it is, sometimes it goes to the pieces of the story that I could honestly not have cared less about. For instance, every single time we cut to the villain, Priyanka Chopra, I checked out, and in those scenes we go an extremely long time without a joke. The pacing of the comedy is all over the place. I don’t need to be busting my stomach every other second, but I also don’t want to go into a movie like this where there are ten minute stretches without a laugh. I completely checked out when the tone shifted, and I don’t think it worked at all for the film. This is Baywatch. The story isn’t important. Just give us laughs. Also, I know this isn’t exactly the most valid complaint, but there isn’t much depth to anything in this film. I didn’t care in moments in which I should have cared, and I didn’t care about most of the characters. I might have cared a bit about Dwayne Johnson’s character, but only because he was Dwayne Johsnon. The rest of the characters are either eye candy or crammed down our throats because the writers think that they’re funny. There’s one character in particular who I knew was either going to be absurdly annoying or a comedic standout. Maybe he’s funny in moderation, but when the writers beat us over the head with his awkwardness, it starts to lose the ever so small bit of charm it was presented with at the beginning.

Overall, Baywatch gave me a lot of things I wanted as well as a lot of things I didn’t want. I wanted laughs. Check. I wanted a charismatic and likable cast. Check. I wanted self-awareness. Check. What I didn’t want was an overemphasis on a flat and overly dark story. It’s not serious in a way that takes away from the self-awareness. It’s serious in a ridiculously unfunny way, and it causes plenty of comedic draughts. Not every line needs to have me rolling in the aisles of the theater, but when I go into an R-rated comedy with ten minute periods without even attempting to get a laugh, there’s a structural problem. There’s also not much to latch onto. Either you’re sold on the comedy or you aren’t. It’s simple as that. Baywatch is a lot of things, and sometimes that’s good, but I wish it would have focused mostly on just being a funny depiction of the cheeseball show it’s based on as compared to interjecting chunks of nothingness. I’m going to give Baywatch a 4.7/10.

Will you be checking out Baywatch? Comment down in the comment section and let me know! As always, thank you, and keep listening to 88.7 The Pulse!