It’s time for another movie review presented by our good friends over at FatCats Gilbert on the southwest corner of Greenfield and Baseline! FatCats Gilbert is the best place to see all of the latest box office smash hits! With movies like Wonder Woman, The Mummy, and Guardians of the Galaxy Vol. 2 all showing at FatCats Gilbert, you can catch up on your blockbusters in the comfort and style of a Recline-N-Dine seat!

I was really hoping that The Mummy was going to be great. Tom Cruise isn’t just a great actor. He’s also an excellent producer. Cruise knows movies arguably as well as anyone in the industry, and I feel like he’s one of the few people in Hollywood who does well at the box office and actually cares about making a good movie. We may never see a Tom Cruise movie with low production value, so I’m going to get as excited about that as I possibly can! Also, I love Sofia Boutella. I’d buy her in anything at this point, and she looked great in the trailers. If this movie was as much fun as the 1999 film was, I was going to be happy, so let’s see if it matched the enjoyment of 1999’s The Mummy!

The Mummy is directed by Alex Kurtzman and stars Tom Cruise, Sofia Boutella, Annabelle Wallis, Jake Johnson, and Russell Crowe. Nick Morton, played by Tom Cruise, makes one of the biggest discoveries of all time and uncovers an ancient Egyptian secret. He opens the opportunity for an evil princess, played by Sofia Boutella, to awaken from her long sleep to reign over the world and give life to the Egyptian god of death, Set.

Though this movie might not be remembered forever, I sure do believe there’s a lot to talk about. That’s mostly because this film is such a mixed bag. I think that there are a few good things to see in The Mummy, and I think that there are a few bad thing to see, so let’s start with the positive. Like I mentioned above, Tom Cruise cares about the movies he makes. He won’t settle for low production value or low quality action sequences and stunts. In that sense, The Mummy is no different. The visual effects are great, and the production design is excellent. These are some of the coolest sets we’ve seen all year, and they match each scene’s tone with the finest attention to detail that creates a spectacular, and possibly sharable, visual world. I also really liked both Tom Cruise and Sofia Boutella. Sofia Boutella just has to be the most patient actress in the world. Imagine sitting in the makeup chair for her role in Star Trek AND her role in The Mummy. If she keeps this up there has to be a patience award in Hollywood ready for her. Anyways, Boutella’s waiting time aside, she’s transformative. She’s entertaining and terrifying, and her screen presence constantly takes over in her scenes. Even when she isn’t on-screen, I always felt her presence in the story world. Tom Cruise also gives a decent performance in the film. It’s not a performance that he will be remembered for, but as far as summer blockbusters go, he provides a little bit of the fun that I wanted from The Mummy. On top of the fun being the best part of the 1999 movie, I also need enjoyment when looking at a franchise movie. For a perfect example, look at Marvel. Marvel constantly puts out enjoyable films that would make me want to revisit the universe every time a new installment is released. If they were flat or boring, I probably wouldn’t want to come back to the franchise, but I enjoyed myself enough to give this universe a second shot. Finally, I like how mythology is used in this film. Often times when a movie takes on Greek or Egyptian mythology, it gets so tangled in either following commonalities or reinventing the wheel that it forgets to follow some sort of path. The Mummy introduces the audience to the mythology then closes the book for the most part to advance into the modern story, and I liked that it remained simple and at least focused on telling the story of the princess. I think it lacked focus in tone and direction, but it does focus on one thing instead of hitting each realm of mythology.

The Mummy is a big, jumbled bag of positives and negatives, so we have a few negatives to discuss. My main issues with it are in the pacing, the editing, and the screenplay. As far as pacing goes, the film is all over the place, and it’s mostly due to editing. We’ll cut from an expositional or character building scene to a scene that just showcases chaos. It’s like the filmmakers said, “Hey, everyone! Look at this chaos!” We’ll respond and tell them that the scenes fail to fit together and flow, but…….. chaos. It’s jarring, and there’s no reason for it to be that way. It feels like there were too many cooks in the kitchen when putting together the final cut, and that’s never good. It’s even more noticeable when a movie has a huge budget and spectacle action sequences that interrupt the smaller moments. I also praised this movie for letting itself have a good time, but when jokes fail, they fail hard, and it’s due to the writing. It’s not just some of the dialogue. It’s also in the structure. The messy structure and dialogue messes with pacing, and if the final cut was edited to the screenplay, we’d be able to see exactly how each piece of the film affects and feeds into all other facets from a quality standpoint. There is also a romantic relationship in the film that I never bought into. It’s never given much depth other than a small bit of history, and I never latched onto it. When scenes that should have been dramatic and emotional hammers came, they dropped the ball, and I didn’t care. I even found certain moments of the finale ridiculous because it still turns to this relationship that I genuinely did not care about. Finally, if you’re looking for a blockbuster that flips blockbuster clichés on their heads, The Mummy isn’t going to give that to you. It hits almost every single blockbuster cliché such as a scene where a guy hands another guy paperwork and says that he and his team can take it from here, a long line of military vehicles transporting discoveries and information that they probably aren’t meant to have or deal with, and action for the sake of action that comes in meaningless places. The Mummy nails all of these and more. 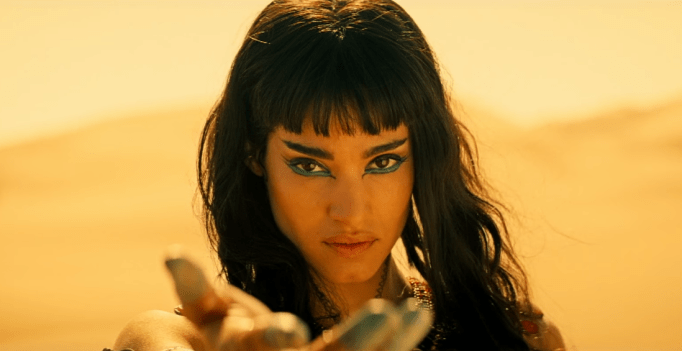 Overall, The Mummy is the definition of a mixed bag. There are good things in this movie. The visual effects and the production design are as good as you will see in theaters today. Sofia Boutella is amazing, and her terrifying screen presence steals each scene she is in. I also loved how it used mythology as more of a set-up piece than a recurring element throwing the story in multiple different directions. Luckily, I can also say that I thoroughly enjoyed myself throughout portions of this film. There’s fun to be had, and that was the component that I was hoping would carry over from the 1999 incarnation of The Mummy. It has plenty of pacing, editing, and writing issues. Those are definitely the three weakest areas of the film, and they all connect to each other. The writing feeds the messy editing and the creative voice that leads the film in many different directions. It hits just about every single blockbuster cliché, and the romantic relationship never sells. I’m going to give The Mummy a 5/10.

Will you be checking out The Mummy? Comment down in the comment section and let me know! As always, thank you, and keep listening to 88.7 The Pulse!