Another season of Game of Thrones is coming to a close, and it’s rightfully one of the most talked about seasons in television history. I should mention that this review will be filled with SPOILERS. If you haven’t seen this episode, be sure to go give it a look then come back to let me know what you thought! As Game of Thrones fans, we’re used to getting the biggest and bloodiest episode of the season with the episode just prior to the finale, so “Beyond the Wall” had a huge reputation to live up to. We most recently saw it with “Battle of the Bastards” in season 6, but season 5 gave us Daenerys’s first time riding a dragon, season 4 gave us the biggest battle we had seen between the Night’s Watch and the wildings, season 3 brought the Red Wedding, season 2 gave us a spectacular fight between Stannis Baratheon and the Lannisters, and the ninth episode of season 1 saw Ned Stark’s head removed at the chopping block. History showed that we were in for a spectacle. Again, this review will be SPOILER heavy, so be sure to check the episode out if you haven’t already then come right back! 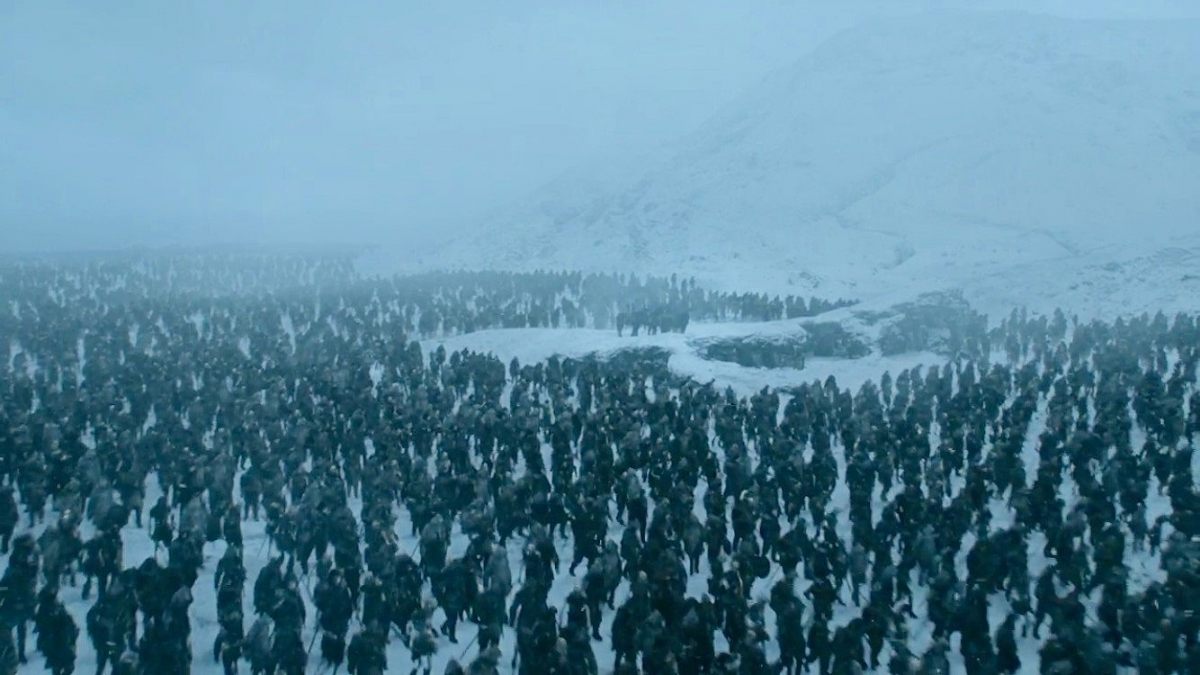 So far I’ve had a love/hate relationship with season 7 of Game of Thrones (except for episode 4. It’s all love for episode 4). I love the individual events, and I love most of the character interactions and meet-ups. What I haven’t loved is the pacing and structure. There are aspects in which season 7 has been my favorite season, but it does seem to be the flimsiest, and I think that this episode hi lights the structural issues. As per usual, I’ll start with the things I liked about this episode. I loved the interactions between the members of our Game of Thrones version of the Suicide Squad. I thought it had some of the most fun and interesting dialogue, and it gave me exactly what I needed to feel complete as a fan. Tormund has become one of my favorite characters in the entire show, and seeing him interact with The Hound was awesome. Despite being a fierce fighter with a real grip on how terrifying the world is, I love his outlook on certain things. Everything he said about Lady Brienne had my sides hurting with laughter. I also love what he says about keeping warm beyond the wall because while it might be funny, we know that he speaks from experience and even calls back to something he said earlier involving a bear. I also loved the interaction between Jon Snow and Jorah. The Mormonts have played a large role in Jon’s life since he left for The Wall, so his conversation with Jorah linking his relationship with the Mormont family was fan service that also brought story elements full circle. 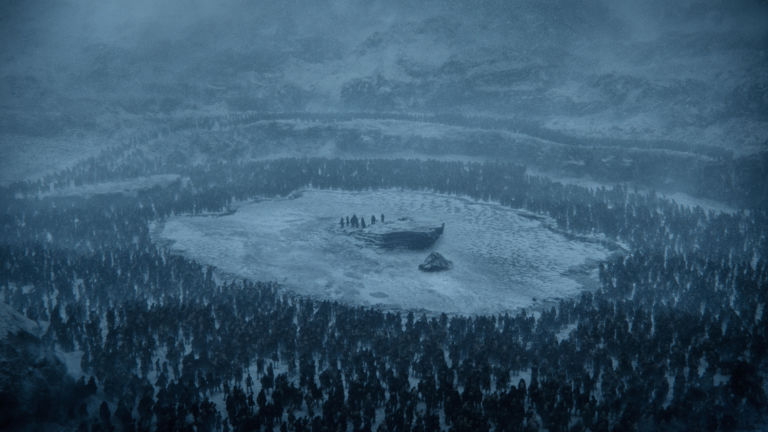 Though we didn’t get much from Tyrion in this episode, I loved his conversation with Daenerys. A lot of people have been saying that her father is starting to come out in her, and she has been making a shift toward becoming a villain. Tyrion took exception to the way she burned Lord Tarly and Dickon Tarly, so confronting her about this was almost giving a voice to the people. Most of us have been cheering for Daenerys for this entire show to become the queen and show the people that power can be used for good. A few episodes ago, she asked Varys to pull her aside and tell her if he ever felt that she was failing the people, but since then, her actions haven’t backed her words. I loved seeing Tyrion call her out and start pulling her back towards her initial goal. Though I may not always agree with her decisions recently, I do like how she seems to make decisions in one of two ways. She either sides with her head, which is usually what Tyrion tells her to do, or she sides with her heart, which aims to help Jon. I think that gives her a very interesting character dynamic that will surely define her by the end of this season or this show. 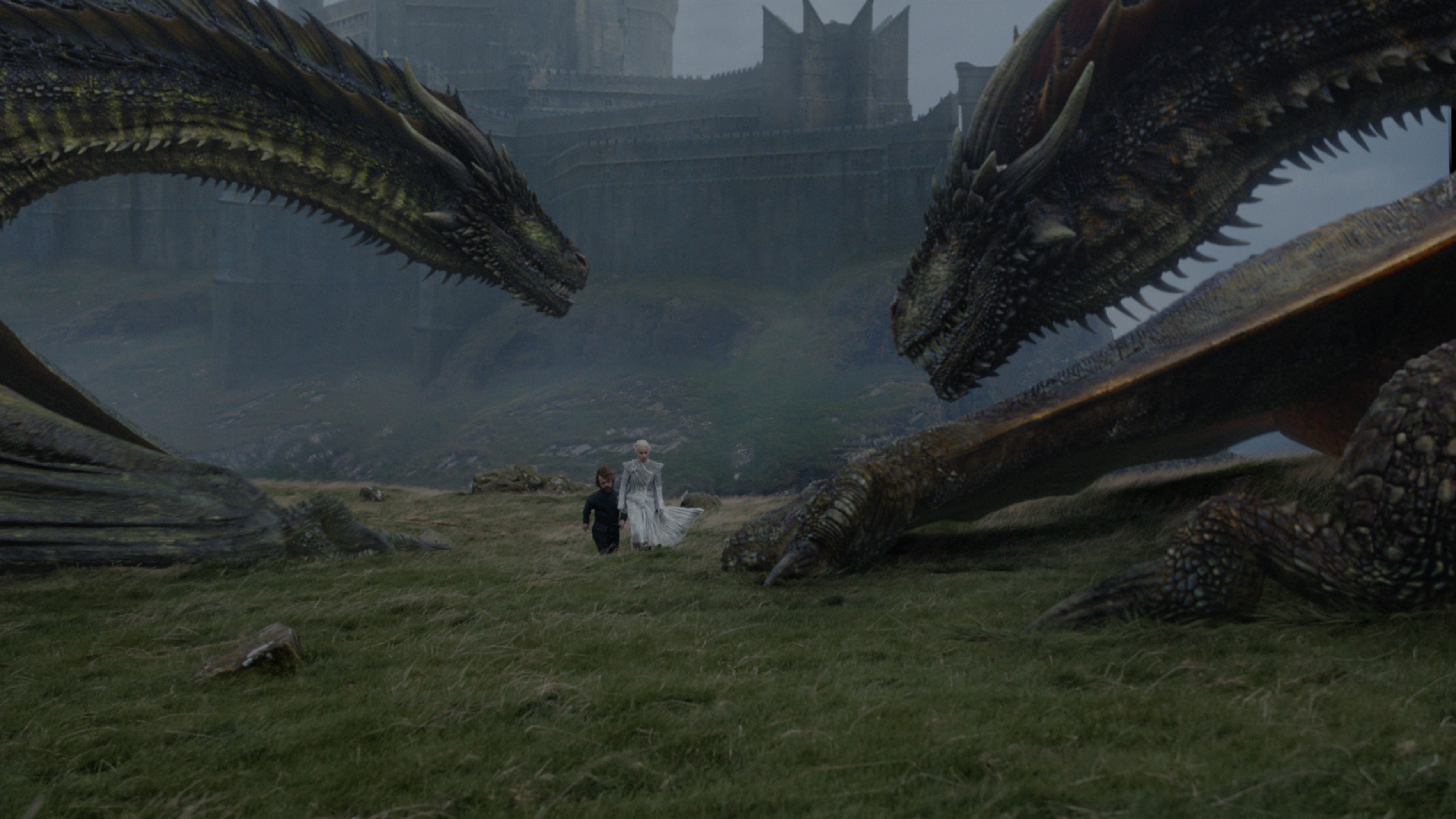 We also have to talk about the final battle with the wights. So far the White Walkers have sort of just been that thing that north of The Wall that our main characters need to be aware of. They’ve been a plot device to forward the story and don’t have too much depth other than a few of the fan theories going over who they are and what they want. I thought that this episode gave much more depth to the wights and the White Walkers. In season 5, episode 8, entitled “Hardhome,” the final scene is something straight out of a horror movie. It looks like a zombie video game where mindless, human-shaped monsters come at our main characters seemingly without thought or reasoning. Though they are terrifying, this episode gave them a bit more showing that they do have an ability to reason. When The Hound throws the rock and doesn’t quite make it to the line of wights, they decide that they can walk on the frozen lake again. I also think that it gave the Night King more depth and really showcased how strong he is. The biggest spoiler of this episode is probably that Viserion, the dragon named after Viserys, is killed by the Night King and his fancy ice spear thrown from hundreds of feet away. This is the first time he has done anything truly terrifying himself, but it also makes sense. As much as we might hate him for killing a dragon, what was he supposed to do? If three dragons come through burning his entire army, he can’t just stand there and watch it happen. The entire show I’ve been wondering what can be added to the army of the undead. I wondered about giants, and that was confirmed. I wondered about bigger animals, and this episode confirmed that with polar bears. I wondered if dragons could be turned, and this episode brought that terrifying reality to life, so it did make me more excited for a final battle between the living and the dead. 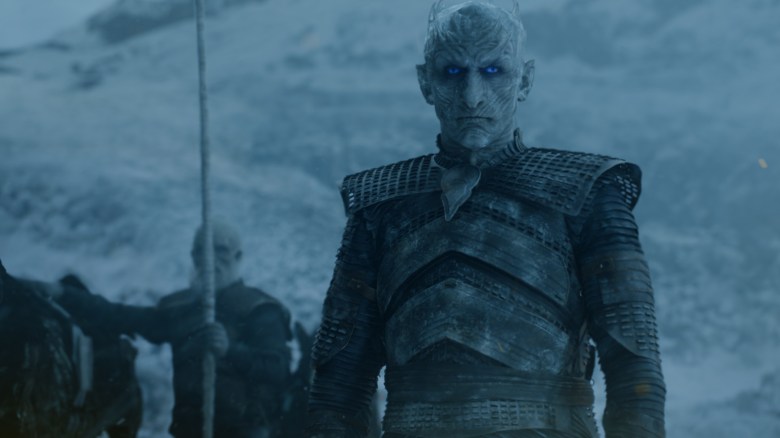 I mentioned that I think that this episode hi lights the structural issues this season has had. I do think that there is a lot to like about it, but it was probably my least favorite episode of the season. For a show that has constantly given us massive stakes, I never felt like the main characters were in danger. The only character of the seven going beyond the wall who died was Thoros of Myr. Not to say that I didn’t like his character, but he was the easy way out of a kill. He died quickly, and I think he was the least the show could lose. I think the pacing of the show has finally caught up in a very noticeable way. This episode is full of plot holes and conveniences. Though I assume our group was traveling beyond the wall for multiple days, Gendry returned back to The Wall, a raven was sent to Dragonstone, and Daenerys flew all the way beyond The Wall in less than one day. Based on how travel and time works in the first six seasons, she probably should have shown up much too late and found that the team had been killed and turned into wights. Also, where does dragonglass and Valyrian steel fit into this mission? Jon Snow had Longclaw, a sword of Valyrian steel, and it looked like Jorah had dragonglass daggers (something awesome that was never addressed), but the rest of the team either didn’t prepare or somehow knew that the weapons they had would be just fine. I’ll give a pass to Beric and Thoros because they have the Game of Thrones equivalent of light sabers, but how does Tormund using his axe or The Hound using Gendry’s hammer work? It could be different with wights and White Walkers, but wights seem to be able to take a massive amount of damage. Another thing that frustrated me about this week’s episode was the constant use of Deus ex Machinas. A Deus ex Machina is where it looks like our characters have no way out of a certain situation. Certain death is approaching, and it’s going to happen whether we like it or not. Suddenly, a random savior comes out of nowhere to perfectly time the save. Examples this episode would be Daenerys flying in on her dragons right as the team is about to be taken for good and Uncle Benjen randomly showing up on a horse for the sole purpose of saving Jon. I’m not mad that Jon is still alive. I’m not mad that any of the team is still alive. I am mad at the backbone being ripped out of the show by these moments. 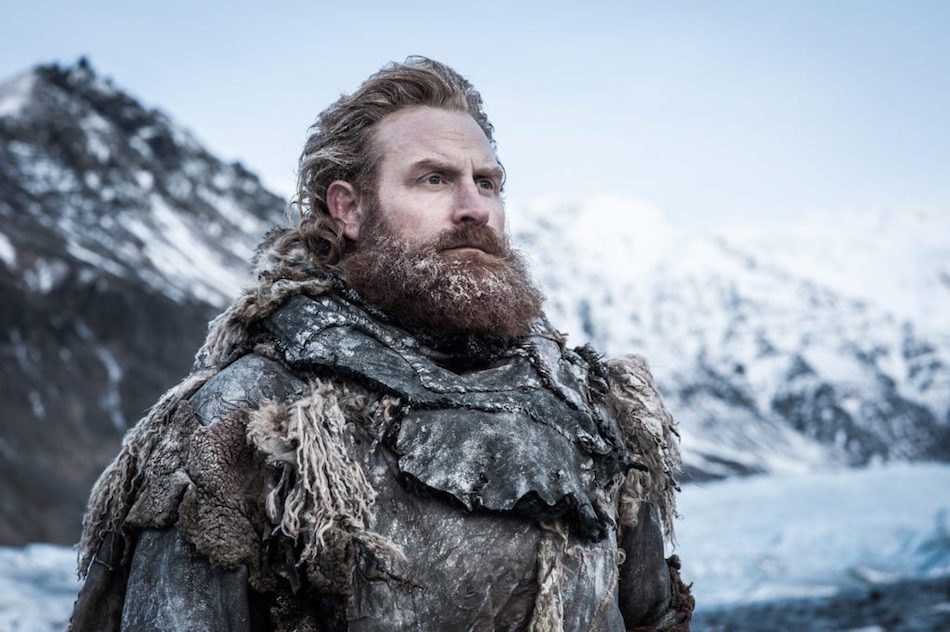 Finally, though I thought Maisie Williams gave a great performance this week, nothing frustrated me like the scenes between Arya and Sansa. Aidan Gillen is a fantastic actor. I don’t want to take anything away from him. But his character is completely holding the Winterfell aspect of this story back. It is truly less interesting, less effective, and more frustrating because he is still alive and causing an awkwardness between Arya and Sansa. Maisie Williams and Sophie Turner might be best friends in real life, but in the show they’re very distant, distrusting sisters. I want to see that put behind them. I want to see them join the same side, and I want to see them work together to end Littlefinger. If you hadn’t seen someone for six years because of circumstances as compared to choice, you’d probably spend a little while catching up him or her. Both of them have been through life-altering experiences, and the sooner they realize that they both now have this grip on reality and this brand new worldview, the sooner I’ll be able to buy into everything that is happening with the Stark children. Let’s be honest. We’ve wanted this reunion, but so far it has been extremely weird with Sansa, Arya, and Bran. 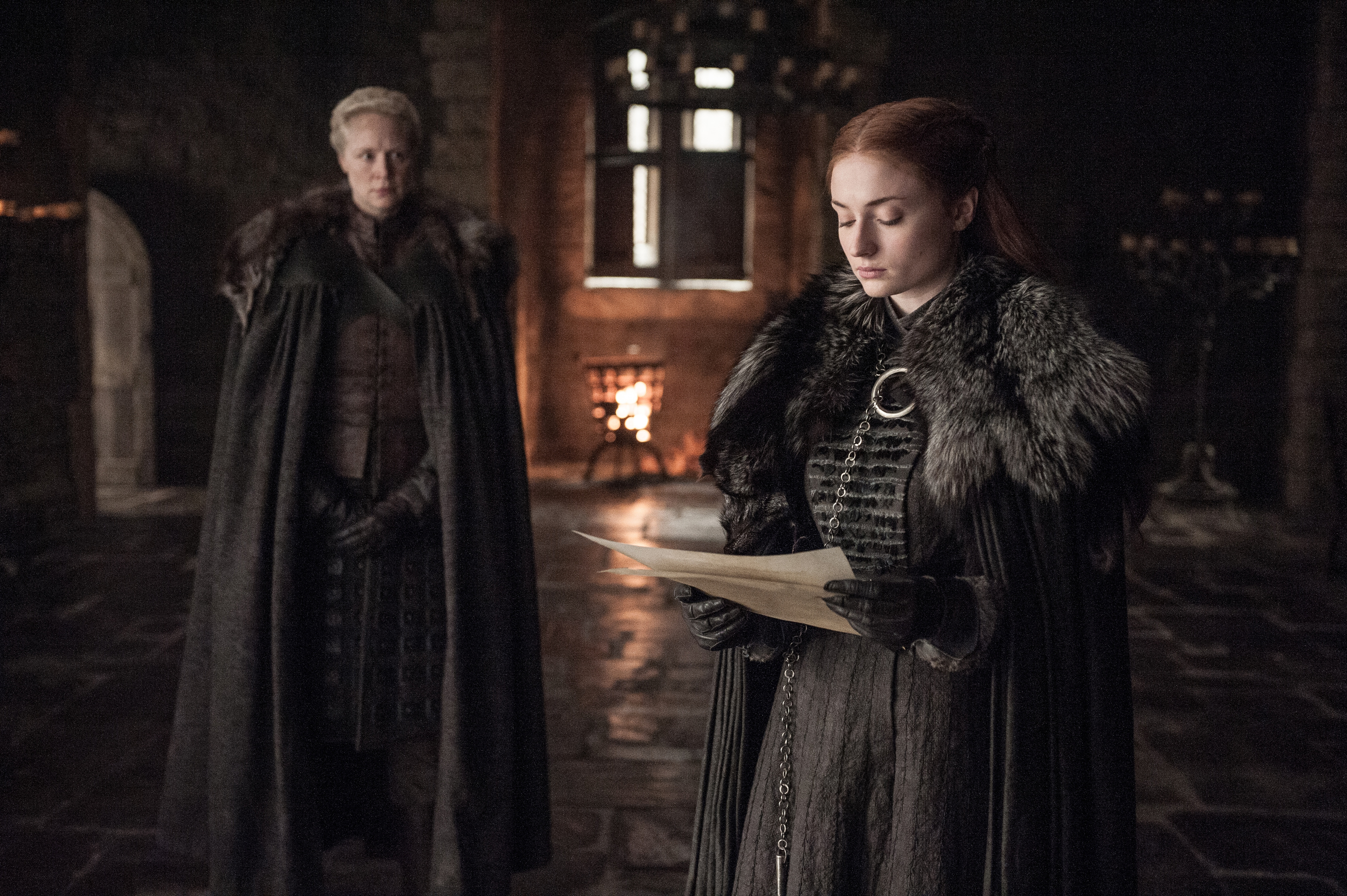 Overall, I don’t think that this is a bad episode. It’s just not on the same level of structure and consistency that we are used to with Game of Thrones. There are amazing moments like conversations between Tormund and The Hound or Tyrion and Daenerys, and a lot more depth is given to the Night King and his army, but structurally, this season’s flimsiness might have caught up to it with the sixth episode. It was pretty underwhelming after the setup episode of last week. I don’t mind setup episodes. In fact, last week’s setup episode was amazing, but I wanted so much more with the follow-up. 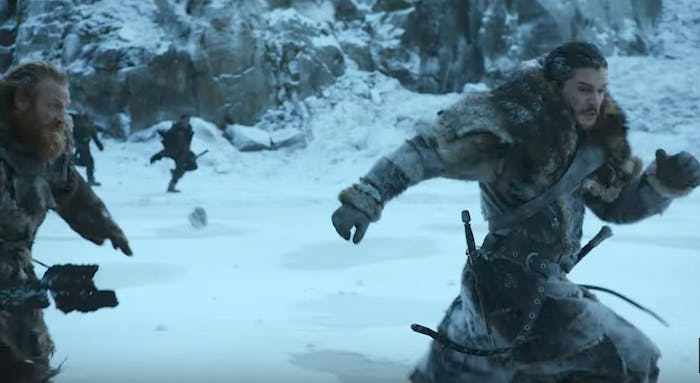 Did you get a chance to check out this week’s episode of Game of Thrones? Comment down in the comment section and let me know what you thought. Also, what are you expecting from next week’s episode? It looks like we’re finally getting our meet-up with every single important character on the show, so it should be something to behold. Be sure to stay tuned for a review of the season finale as well as the season as a whole! As always, thank you, and keep listening to 88.7 The Pulse!