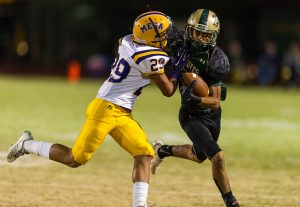 Friday, October 6th the Coyotes of Skyline took on the Mesa High school Jackrabbits in Mesa. Coming into the game Skyline has an almost completely new O-line that Mesa has not seen. Last year Skyline had also beaten Mesa at home. The Jackrabbits had not improved much since the previous season as they lost their home opener against mesquite.

Within the first quarter Running Back Aaron Wood scored twice allowing Skyline to lead 14 to 0 at the end of the 1st. #4 Wood ran both a 33 yard as well as a 50 yard touchdown impressively flying through the Jackrabbits defensive line. First play of the 2nd quarter led to a sac for Mesa’s quarterback Nate Hanna #13, earning the Jackrabbits a 10 yard loss with 2nd, 20 to go with 11:45 left on the clock. Continuing to dominate over Mesa quarter back for the Coyotes #7 Marcus Brown ran in for a touchdown, Skyline now leads 21-0.  Time at 4:17, wide receiver Boyd Max ran a 60 yard touchdown in, putting Mesa on the board at 21-6 with a missed kick. 55 seconds to go in the first half with an interception for Skyline now gives them an opportunity for a 45 yard field goal, which of course was good ending the first half.

Beginning the second half #5 running back, Kris Jackson scored, Mesa had went for the 2-point conversion leaving the score now 31-14 with 6:17 left in the 3rd quarter. Aaron Wood now has his 3rd touchdown of the game after a 54 yard run and a good kick from kicker Barrett Fessenden leaves Skyline with the lead of 38-14. Intercepted at the 43 yard line by Skyline to help end the 3rd quarter. Not much action within the 4th. Skyline ends the game with a touchdown once more from wide receiver #4 Aaron Wood driving up the score to 44-14 as the final versus Mesa.

Not a very good game played by the Jackrabbits, they were over powered by the Skyline offense as well as defense who continued to shutdown Mesa throughout the game. Although mesa did have a few moments were they broke away from the Skyline defense. It was a great game for the Coyotes wide receiver Aaron Wood who had an impressive 4 touchdowns during the game, running over 137 yards.