It’s time for another movie review presented by our good friends over at FatCats Gilbert on the southwest corner of Greenfield and Baseline! FatCats Gilbert is the best place to see all of the latest box office hits including Ready Player One, the brand new film from the father of the blockbuster, Steven Spielberg! To see all showtimes and to purchase tickets, you can click right HERE!

Steven Spielberg is one of the reasons I love movies. If you asked me why I truly believe that movies are magic, my number one answer would probably be “Steven Spielberg.” We’re getting a brand new movie from the guy who made Jaws, E.T., Close Encounters of the Third Kind, the original Indiana Jones trilogy, Saving Private Ryan, and Jurassic Park and Schindler’s List in the same year. I think that’s unbelievable to think that the director of a dozen classics, literally, is still making movies for us to enjoy. This also seemed like the perfect material for him. Spielberg gets to pay homage the ‘80s, the decade he completely dominated. To be honest, I haven’t read the book. I’d love to give it a look, but I just haven’t had the chance. From what I understand, it’s exactly what people who have never been to Comicon picture it as: a giant, sweaty world of nerds and geeks battling to the death for everything that is good and true in life. Let’s talk about the movie! Ready Player One is directed by Steven Spielberg and stars Tye Sheridan, Olivia Cooke, Ben Mendelsohn, and Mark Rylance. In a reality that has been left in shambles by those who inhabit it, the only escape is into a virtual world of video games, classic movies, and pop culture called the OASIS. The creator of the OASIS passed away years ago, but not before he was able to leave several hints in the game suggesting an actual Easter Egg that had been hidden within the world. Now players like Wade Watts, played by Sheridan, use their avatars to search for the Egg, a prize that will reward its finder with ownership of the OASIS and more money than he or she could possibly imagine.

In case I needed a reminder, Ready Player One screams every single reason that I love Spielberg so much. He makes me believe. I believe in the magic of movies, and I believe in everything I see on-screen. I believed in the world, the characters, the creations, the good, the evil, the magic, the science, and so on. Spielberg does such an incredible job of creating this world and allowing the audience to be a part of it. Sure, it may have helped that I was able to see the movie in IMAX 3D, but I felt like I was physically invested. Spielberg has this beautiful way of blocking that tells the story so beautifully. It’s like shots are leaking right into other shots, and everything in-frame is perfectly situated and composed. I thought that one of my biggest issues with the movie was going to be the saturation of the shots, but I thought that Spielberg did an unbelievable job of incorporating the Easter Eggs and homages into the visual world and story naturally. I loved the story itself, and I loved all of the references to pop culture. It never feels like any gadgets or scenes have been pushed into the movie for the sake of making the audience smile. Trust me, they do smile, but each reference, or recreation when it comes to one scene in particular, plays an important role in the plot or an important role when it comes to building characters, which I adored. I think that this movie brings back some of what the ‘80s gave us thematically when it comes to teamwork and the whole being greater than the sum of its parts. I had such a blast watching these characters work together, especially inside the OASIS. I was definitely more interested in what was happening inside the OASIS than what was happening outside in the real world, but that was kind of the point of the movie. I understood why the OASIS was the escape, and Ben Mendelsohn’s villain brought so much to the film. He was genuinely terrifying, and his actions made sense. Of course, if there is this kind of prize on the line, there will be a corporate big shot somewhere trying to take advantage of the situation for personal gain. The two hours and twenty minutes absolutely flew by, and I honestly don’t think I’ve had as much fun in a movie this year as I had with Ready Player One. I did have a couple of issues with the movie. First, the dialogue is a little bit simple and over-explanatory. There is a ton of exposition, especially in the first act. I get that this is a layered story with lots of information to give out, but I don’t think that it necessarily needed to spoon-feed us quite as much as it did. I also think that the story does tend to get slightly muddled. It’s nowhere near being incoherent or difficult to understand. In fact, I loved the story itself, but as far as storytelling goes, there are some missing pieces. It’s tough to blame Spielberg for that simply because there is so much to tell in such a short amount of time. Sometimes I’ll have an issue with a film’s narrative being too thin for feature-length. In this case, there’s too much, which is actually a great thing when it comes to developing the characters and the story-world, but it makes storytelling much, much more difficult. Finally, I have one issue with the villain. I can’t go into it in much detail because it is occurs in the finale, but I think it was a very tidy and easy wrap when the character probably deserved something slightly more memorable.

Overall, I absolutely adored Ready Player One, and I cannot wait to see it again in theaters. Spielberg makes me believe in magic, not just in movies, but in the world, and he is the master of escapism into a reality that allows you to be so much more simply by being yourself. He blocks and shoots the action sequences perfectly, and I never had an issue with the scale and saturation of shots. The final battle is one of the most incredible action sequences I’ve ever seen, and the pop culture references and nods pay off either through narrative or through character. The passion for the source material and, heck, the source material’s source material, is overflowing and floods the theater, and it’s all brought together through a ball of a story and well-assembled, nuanced, flawed characters. The dialogue does tend to get a bit simple, and the story muddles itself by being so dense, but between my enjoyment, the technical perfection, and the heart-warming plot, I love Ready Player One, and I’m going to give it an 8.5/10. 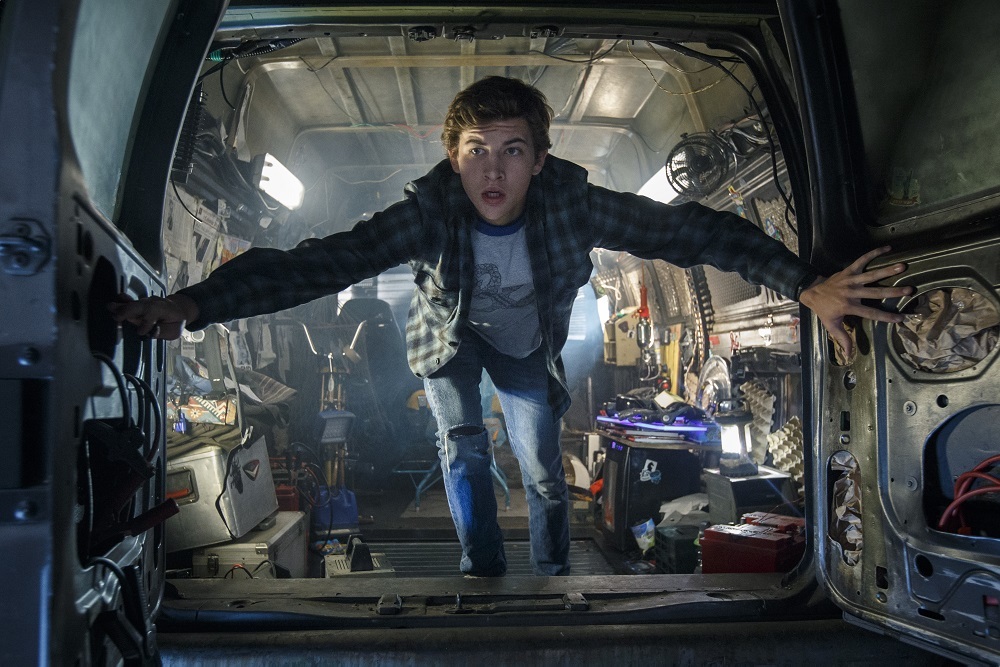 Will you be seeing Ready Player One? Comment down in the comment section and let me know! As always, thank you, and keep listening to 88.7 The Pulse!