It’s time for another movie review presented by our good friends over at FatCats Gilbert on the southwest corner of Greenfield and Baseline! FatCats Gilbert is the best place in the valley to see the latest box office hits like Blockers, A Quiet Place, and Ready Player One! To see all showtimes and to purchase tickets, you can click right HERE!

I always look forward to a good raunchy comedy. We just don’t get the same amount or quality of comedies we saw in the 2000s. This movie sounded a little bit like American Pie, for obvious reasons, but with Leslie Mann, Ike Barinholtz, and John Cena were being added to the mix, which sounds awesome. I actually thought that John Cena was great in The Wall, so I was excited to see him give R-rated comedy a shot. He’s extremely charismatic, and though he doesn’t have the acting chops of The Rock, I could see him joining the same type of projects as The Rock. Leslie Mann and Ike Barinholtz are veterans in this style, so Cena was in good company. Let’s talk about the movie! 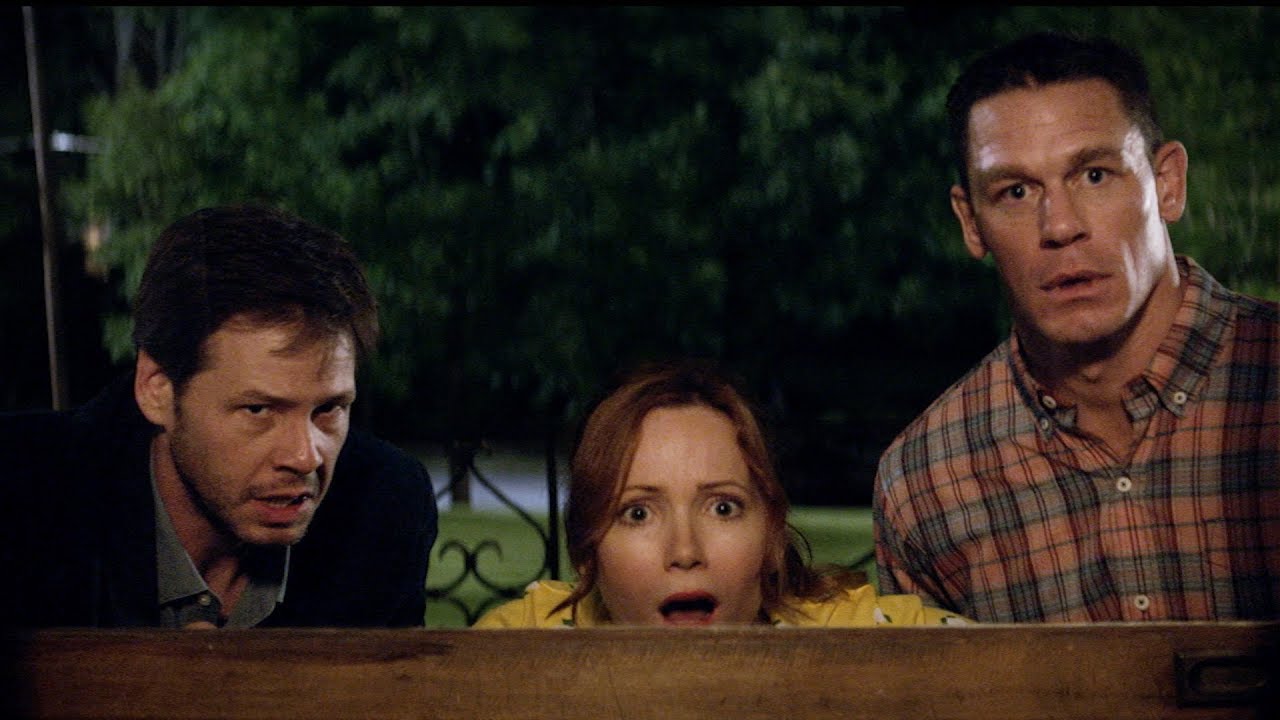 Blockers is directed by Kay Cannon and stars Leslie Mann, John Cena, Ike Barinholtz, Kathryn Newton, Geraldine Viswanathan, and Gideon Adlon. Julie, Kayla, and Sam have been best friends since their first day of school. They do everything together, and on Prom night, they’ve decided that they want to lose their virginity together. They make a pact, and they head out for the greatest night of their young lives. When Julie leaves her laptop open, displaying her texts out in the open, her mother sees that they’ve made a secret pact. She, with the help of Kayla’s dad and Sam’s dad, decides to stop them and keep them from ruining their lives forever.

When I walk out of a comedy, I always ask myself one very important question: Did it make me laugh? Blockers was able to give me that. I thought that Blockers was hysterical, and it was mostly because it was unafraid to go to certain places. This movie has no filter, and I loved that. It pushed the envelope, and it gave me jokes that I didn’t expect whatsoever without apology. Other than the situational comedy, which is great, I thought that Ike Barinholtz was the stand-out. His delivery and his command of every single line is incredible, and it’s just another reminder that we don’t get enough of him. We also don’t get enough Leslie Mann. She is another master of this genre, and she makes awkward, real comedy work so well. I also thought that the three adults had excellent chemistry. We spend a lot of time with the high school girls, but the main characters of the movie are definitely the parents. They work so well together, and the lengths they go to in an attempt to stop their daughters is funny, but it’s also kind of touching. I actually understood both sides. I could get behind both the girls and the adults, and I actually had a philosophical battle right in the middle of a movie called Blockers with a rooster in front of the logo on the poster. The last thing I was expecting out of this movie was a touch of real heart, but there I was, trying to decide which side I was on.

Though Blockers delivers the laughs I was hoping for, it definitely does have some issues. First of all, as charismatic and funny as John Cena is, he didn’t completely own this role. I think that, with his comedy, he tends to land in the WWE style delivery that comes off a little bit overcooked. He still has some great moments, and he gets a bit of a pass because of how new he is to this, but he does stand out a bit among the seasoned vets in Ike Barinholtz and Leslie Mann. I also don’t think that it gives itself enough time to land. There are so many jokes and one-liners in this film, but sometimes they cross over with the laughs. I wish that the jokes had a little bit more time to land and set in with the audience. Instead, I feel like I missed a few of the laughs. Maybe that’s all part of the strategy to get me in the theater a second time.

Overall, Blockers delivers the laughs, and they don’t stop throughout the entire runtime. It’s unafraid to push boundaries and to use its R-rating to avoid any sort of filter. Ike Barinholtz and Leslie Mann are the standouts, and seeing them in these roles makes me wish that we would get more from them. The entire cast has great chemistry, and I was much more emotionally invested than I ever thought I’d be. While John Cena does still have a little bit of work to do to overcome the WWE persona, he’s extremely charismatic, and I think he has found a home in comedy. I do wish that it would have let a few of the jokes land. At times it seemed as though the movie was trying to push along to the next scene a bit too quickly, but Blockers gave me the laughs I wanted, and it’s worth seeing in theaters on that basis alone. I’m going to give Blockers a 7/10. Will you be seeing Blockers? Comment down in the comment section and let me know! As always, thank you, and keep listening to 88.7 The Pulse!

Check whether your Facebook data was shared with Cambridge Analytica