Some people are destroying their Nike shoes! It’s all part of a protest to whom the company hired to be the face of their latest advertising campaign.

One former NFL star is back in the spotlight to promote the 30th anniversary of its “Just Do It” ad campaign. It’s former San Francisco 49er Colin Kaepernick. 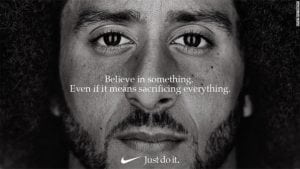 The superstar athlete hasn’t thrown a pass in the NFL since the 2016 season. Back then he raised controversy over kneeling for the National Anthem. It was to raise awareness about police brutality against African-Americans and other racial injustices. Many other players joined Kaepernick. He has become a symbol of the dividing lines over race in America.

Nike’s decision has been heavily criticized by right-wing customers. Some posted videos to social media of them burning and cutting up their Nike attire.

This is not the first time members of the public have protested against brands by destroying the goods they had previously purchased.