The holidays are a wonderful time to see light displays all over the Valley and we rounded up some of the best for you, your friends, and family to experience. Here are the Top 25! 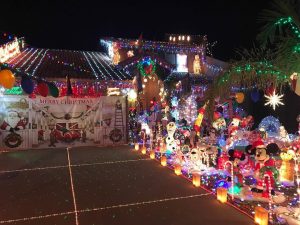 Honorable Mention: Danny Dingman’s Santa’s Runway Lights in Mesa may only be one townhouse, but it’s quite an impressive display. With over 50,000 lights, figurines, and even snow nightly, it’s worth the trip. It is located at 2329 N. Recker Road in Mesa.

Honorable Mention: The Stewart-Christofolo ‘Christmas House’ display features more than 55,000 lights synchronized to holiday songs. In addition, there are leaping arches and poles, shooting stars, Mega Stars, a 10-foot Mega Tree, snowmen and reindeer. It is running nightly from 6-10 p.m. through January 2nd. If you prefer to drive-thru, tune your radio to the suggested station to provide your soundtrack to the experience. Donations accepted for Make-A-Wish Arizona. 2203 South Boca, Mesa, AZ, 85209

24: Tune in to watch this season of The Great Christmas Light Fight, and you’ll see our state being represented with the Phoenix Winter Wonderland! David Chuchla’s West Phoenix home is decorated inside and out. Excited your senses with over 70,000 lights, 50 trees, 6,000 ornaments and over 1,000 animated figures. Since 1994, it’s been open every night in December from 6 to 10 p.m. Join the fun at 4237 W. State Ave., Phoenix, AZ, 85051. More info at phoenixwinterwonderland.com

23: According to one fan, this couple has more energy than a 2 year old. They start decorating in August for their Holiday display. Hunter’s Christmas Wonderland at 2467 E. Aris Drive in Gilbert boasts 80,000 lights. This is one Christmas house you can see inside and out for free. Donations are accepted. Look for nearly 3,000 snowmen and nearly 400 Santas. Friday and Saturday nights from 6-10 p.m. Visit facebook.com/hunterschristmaswonderland for more dates and times.

22: Frank Kostyun’s Christmas on Milky Way, is a dazzling out of this world display in Chandler that has more than 100,000 computer animated Christmas lights set to music like Darude’s hit “Sandstorm” and a number of holiday carols and favorites. There are also several video clips, including the famous scene from Christmas Vacation where Chevy Chase flips on his display. Befitting its name, it boasts an array of 26 stars made from color-changing LEDs that are perched atop the house. It can be seen nightly from 6-10pm and runs through Jan 1st at 4606 W. Milky Way, Chandler, Arizona 85226. Chandler Blvd near Rural. facebook.com/ChristmasonMilkyWay

21: Christmas Spectacular at 8535 South Stanley Place in Tempe is the gorgeous home of Stanley and Andrea Benson. It becomes even more eye-catching when the couple rolls out their animated yuletide array of more than 100,000 lights. Strewn throughout the branches of three enormous trees and arranged practically everywhere else on their house and in its yard, the property is a happy hullabaloo of color. Things are made even livelier by an enormous animated Santa measuring 30 feet tall that stands over the scene as various elves deliver gifts, decorate trees, and frolic on a teeter-totter. On display nightly, 5 p.m. to 11 p.m., through January 1. On Warner between McClintock and Rural.

20: Since 1986, Christmas on Upland Drive has offered onlookers a tremendously festive holiday light display involving many houses in the neighborhood. Something unique to this event is the ability to ride in a horse drawn carriage. Food is also offered. Nightly from 5-11 p.m. Near Warner and 101. facebook.com/xmasonupland

18: Christmas Forever is an immersive nighttime spectacular that includes 100,000 computer programmed lights, music, pyrotechnics, characters, and video projection. Kyle and Sammy Pratt have obviously learned a thing or two about grabbing people’s attention from their dad, legendary Valley radio personality Dave Pratt. Their annual holiday display, Christmas Forever, serves up a show-stopping and eye-popping collection of choreographed lights, video projections, and even pyrotechnic displays. It also offers a soundtrack featuring a few rock songs and plenty of charming elements. Open now through Dec. 31, weekdays from 7-9 p.m. and 7-10 p.m. on weekends. When arriving at the community gate, please press 031 on the keypad to request gate entry at 10526 N. 119th Street, Scottsdale, AZ, 85259. christmasforeveraz.com

17: The Richins Residence at 396 West Liberty Lane in Gilbert boasts a massive annual light display, created by Gilbert resident Chad Richins. It not only encompasses his own two-story home but also four neighboring houses. The display features more than 100,000 individual lights that sing with color while glittering and flashing through an impressive choreographed audio and visual sequence that lasts for 13 songs. Richins, who’s been creating light displays for a decade, programs everything himself, which requires a lot of man-hours for each song. “It takes me about 100 hours per song,” he says. “It’s a lot of work.” The display has earned plenty of attention, both from Valley residents (who flock to the display) and from the producers of ABC’s The Great Christmas Light Fight, who featured it in an episode that aired last year. If it’s good enough to make the airwaves, it’s definitely worth checking out. Operated nightly from 6 p.m. to 11 p.m., through December 31. Near Ray road between Cooper and Gilbert.

16: Christmas On Orchid Lane offers 100,000 lights on more than 15 decorated homes, and just because Santa is on his sleigh Saturday nights for complementary individual or group photos (weather permitting) we put this fun place at number eight on our list. Park and walk the street any evening for photo opportunities. Food donations are accepted for a local food pantry. 6480 W Orchid Lane, Chandler, AZ, 85226. Visit facebook.com/ChristmasOnOrchidLane

14: An annual tradition attracts families and individuals from all walks of life at The Church of Jesus Christ of Latter Day Saints Mesa temple. The free display of hundreds of thousands of twinkling lights is open to everyone. As you walk around the grounds, Christmas music plays. There is a nativity scene and statues of Mary and Joseph. The lights are on nightly from 5 p.m. to 10 p.m. 525 East Main Street Mesa, Arizona 85203. Unfortunately, due to the Mesa Temple renovations, the Christmas Lights display has been postponed until 2020.

13: In the past, there have been a few Arizona homes on the seasonal television special, ‘The Great Christmas Light Fight,” but only one that won! Christmas on Comstock in Gilbert is made up of 110,000 lights over 13 houses that have been synchronized to music. In 2015 the extravagent light display took home the grand prize of ABC’s tv special The Great Christmas Light Fight! An amazing show located near Elliot and Higley roads which benefits the Make-A-Wish Foundation and is one of the most impressive holiday light displays across the nation. It runs through Dec. 31 and is best experienced by driving through with a car full of family and/or friends and listening to 93.9 FM. 3642 E. Comstock Dr., Gilbert, AZ 85296. facebook.com/ChristmasOnComstock

11: The Solorzano and Nevarez families have combined to display 130,000 lights between two houses on East Harmony Avenue in Mesa. One of the houses is even synchronized to music. Check out nevarezlights.com for all the info.

08: The Pelky Family of 1335 N. Papillon Circle in Mesa have tirelessly put up 150,000 lights for onlookers to take in. The experience includes a full manger scene, land of misfits, the Grinch attempting to get into the house, a flying sleigh and reindeer and a forest of candy canes. Canned food donations accepted for Hope Women’s Center. They’ve even got a giant birthday card for Jesus Christ. On display from dusk until Midnight nightly.

06: Chris Birkett’s Winter Wonderland is a visual spectacle of dazzling lights and displays! Over a quarter million lights are synchronized to holiday music. It’s so good it won The Phoenix New Times Best of Phoenix Award! Take your sleigh over to 8414 E. Valley Vista Drive in Scottsdale anytime from 6-10 p.m. You can visit as many times as you wish from now until December 31st. Enjoy computerized shows set to holiday music with 250,000 lights. Warm with hot cocoa and toast marshmallows on an open fire. ‘Island of Misfit Toys’ is the backyard theme. All the 411 at winterwonderlandaz.com

05: The Natal Circle Holiday Lights are situated on a cul-de-sac on Natal Circle just east of Cherry in Mesa. A total of 14 homes in the neighborhood deck their houses with over 250,000 lights and backyard nativity scenes. The wondrous display featuring nativity scenes, angels, reindeer, Christmas trees, candy canes, garlands, wreaths and more goes until Christmas Eve, dusk until 10 p.m. at 654 W. Natal Circle, Mesa, Arizona 85210, near Guadalupe and Country Club Roads.

04: Another house featured on a nationally televised show at number three on our list is David Preston’s Holiday Lights. If you happen to be on your way to Las Vegas for the holidays, the Preston Family in Kingman would love to have you experience their more than 270,000 lights all synchronized to holiday songs. With some help, it takes about 30 days to set everything up. The home was featured on the ABC seasonal show, “The Great Christmas Light Fight” in 2016 as well. 661 Shadow Mountain Drive, Kingman 86409

03: There’s absolutely zero chance you’ll miss Mel and Patti Tasker’s sprawling display out among the farms and ranches of Laveen at 8211 South 63rd Avenue, since it’s easily visible from at least a mile away. It’s probably because their house is perched atop a small hill with not much in the way of street lights out in this neck of the Valley. Oh yeah, and there’s also the fact they’ve got upwards of 300,000 lights covering a majority of their property. It’s so big that you can drive a car through it, as the display is arranged along the Tasker’s circular driveway. Be sure to take it slow, however, both for safety and to give yourself time to check out each of the hundreds of cutouts of cartoon and kid-friendly characters (including everything from Astroboy to The Legend of Zelda), a bestiary of zoo creatures made from lights, and an animated display set under the sea. Enjoy the experience Monday to Thursday, 5 to 11 p.m., and Friday to Sunday, 6 p.m. until 1 a.m., through January 2.

02: Festival of Lights is the beautiful Million White LED Lights that famously illuminate Chandler Boulevard (from 24th Street to Desert Foothills Parkway) for the festive season. There to take in every night from now until Jan. 1, 2018. They are worth going the long way home to see. folaz.org 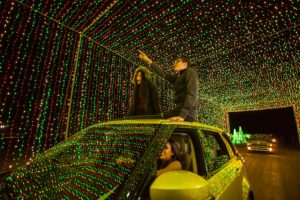 01: And the number one holiday light experience goes to one of the best and brightest Christmas light displays in the Valley! It’s called Illumination: Symphony of Light. Boasting a mile-long drive-thru light show near Interstate 17 and Jomax Road in North Phoenix. It has tractor-trailer-sized light tunnels to drive under, glowing hoops, lighted toy soldiers, and a 40-foot Christmas tree. Plus, 1.5 million lights are synchronized to popular holiday songs and current hits that play through your car’s radio. The show’s creators said the display was designed to create memories. Open daily from 530-1030p.m, now through Jan 14th. A portion of ticket sales benefit Phoenix Children’s Hospital. More info at worldofillumination.com