Maybe you remember him from playing J.R Chandler in the daytime drama, “All My Children,” in the 1990’s. Perhaps you had posters of Dreamstreet plastered all over your bedroom walls. It could of been those appearances on Law and Order: SVU, Summerland, or Greek. Personally, I liked his debut single, “Beautiful Soul,” in 2004. 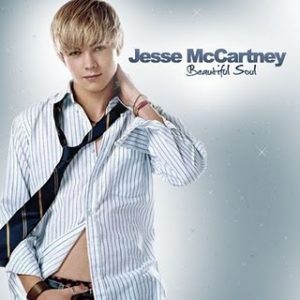 Jesse McCartney is the kind of dude that girls love and guys wish they could be. He has met two U.S Presidents (Barack Obama and George W. Bush), performed for thousands of devoted fans in Tokyo (where he watched the non-English-speaking audience sing along to every word), and met his musical hero Stevie Wonder.

The New York-born artist started off in a boy band before going solo. His launch to stardom came when McCartney co-wrote the Grammy Award-winning single “Bleeding Love” with Ryan Tedder, performed by Leona Lewis. An international mega-hit, “Bleeding Love” won a Grammy Award for “Record of the Year,” reaching No. 1 in 35 countries. It became the best-selling single of 2008 worldwide.

All that was done before the release of his 2018 single “Better With You,” his first new music since his well-received 2014 album In Technicolor. It premiered on PAPER Magazine then climbed Spotify’s US and Global viral charts. The press and performance swiftly came afterwards from Z100 with Elvis Duran, Paste Magazine, MTV, SiriusXM, Billboard, Huffington Post, and V Magazine. The success thus far has helped McCartney reconnect with a feeling that he hadn’t had before with his music: the freedom to write as he wishes, everything from his perspective.

McCartney’s next single “Wasted” reveals more of thoughtful yet self-deprecating side of him that often lay dormant in his earlier, “cleaner” years. The most exciting part is that his fans are coming along for the ride. “It’s nice to be able to talk about things that the fans are also going through,” he says. “I think they feel connected to me because we did basically grow up together. When I was 16, they were in high school with braces on just like me, and now here we are; they’re playing my song at their wedding.”

Jesse McCartney will be live at The Van Buren in Phoenix this Thursday, February 7th. Doors open at 7 p.m. Everyone 13 and up is welcome. Tickets available at jessemccartney.com 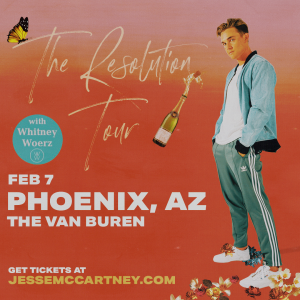