From John Lee Hancock, the director best known for The Rookie (2002), The Blind Side (2009), and Saving Mr Banks (2013) and John Fusco, the writer of Young Guns, comes an entirely different take on the Bonnie & Clyde era. Let me emphasize that this is not a remake of the 1967 original film, Bonnie and Clyde, but rather a unique true story of the two men who took them out when no one else could. 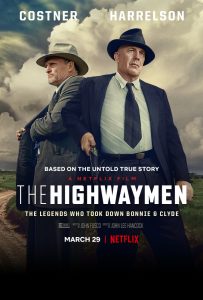 The Highwaymen follows two retired Texas rangers, played by Kevin Costner and Woody Harrelson, hot on the path of the infamous Bonnie and Clyde.

While the film really is an actors’ showcase, those expecting non-stop action will be disappointed. Highwaymen is a dramatic slow-paced unraveling of two men who carry the moral weight of things they have done with them as they pursue two of America’s most notorious criminals.

It was writer John Fusco’s fascination with outlaws and cool Western heroes that brought this screenplay to life. It also helps that, John Lee Hancock, the director, is from Texas.

Furthermore, in order to set an authentic scene, the movie was filmed in Louisiana.

The original intention was to cast Robert Redford and Paul Newman, instead we get Oscar nominee and Emmy winner Woody Harrelson and Academy Award winner Kevin Costner. Both are great choices. With Woody having starred in Oliver Stone’s Natural Born Killers, he brings an intensity to the role. Of course, you can’t forget Kevin Costner who played Wyatt Earp.

Altogether, The Highwaymen is an effective character study that will leave you with an understanding of the legacy of these two men’s friendship. Though the journey to catching up to the killers may be a long one at 2 hours and 15 minutes, it is, at times, an engaging piece. Perhaps I was expecting more action and shoot-em-ups. What I got was a slow-burning fire into the souls of these heroes. If you enjoy slice-of-life cinema, this one is for you.

Which upcoming Disney movie are you just dying to see most?