For the first time in franchise history, the Toronto Raptors have won the NBA Finals in 6 games, as the series-clincher was last night.

Along with their first Finals win, it was also the first time they have ever been to the Finals. Not to shabby for your first time.

Star forward Kawhi Leonard won the Finals MVP Award, and this marks the first player in NBA history to have won the Finals MVP Trophy in both the Western AND Eastern Conference. His first Finals MVP was with the San Antonio Spurs in 2014 when they beat LeBron James and the 2-time Champions, Miami Heat… I’m sorry LeBron.

The MVP scored 22 points in the victory, as well as breakout guard Fred Van Fleet. Kyle Lowry and breakout center Pascal Siakam (pronounced “see-ah-kum”) both scored 26, and Siakam finished with a double-double (he had 10 rebounds).

The Warriors – despite their fight – were plagued with injuries in this series. They lost star player Kevin Durant to a ruptured Achilles in Game 5 after previously sitting out for soreness in the same foot. Knock-down shooter Klay Thompson also suffered an injury, as he tore his ACL in last night’s match.

With all of that said though, probably the most notable moment in the series is when Kawhi Leonard did something he has never done in his career before: smile! 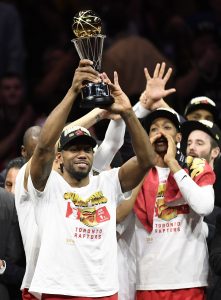 In all seriousness, Congratulations to the new NBA Champions – The Toronto Raptors!