Going… going… gone! It’s a homerun! The Bambino has done it again!

That was every sports announcer in America after the legendary Babe Ruth came up to plate.

He was a remarkable hitter who played for the Boston Braves, the Boston Red Sox, and most famously, the New York Yankees. He finished his career with over 2,500 games played in 22 years, and hot a total of 714 home runs.

How would you like to own the game-worn jersey of someone like that? Well… It’s going to cost you.

A game-worn New York Yankees jersey that belonged to The King of Crash himself from 1928-1930 was just sold at an auction at Yankee Stadium for a whopping $5.64 million. That’s the most expensive piece of sports memorabilia ever sold. 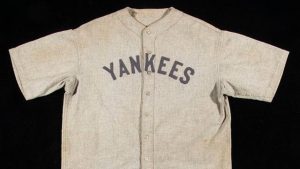 Ironically, the previous record was also held by a Babe Ruth jersey. It was a game-worn New York Yankees jersey from the 1920 season, where he hit 54 home runs and tallied 135 RBI (runs batted in).

The jersey features something that happened only once in Yankee Baseball history. They stitched the last names of all the players’ jerseys on the inside of the back collar. The Babe had “Ruth” stitched into his. 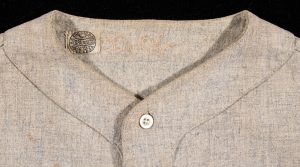 That would look really good in the sports room!

Love Your Dog? Netflix Wants To Hear YOUR Story