Juiced baseballs have been a topic of discussion for a while now, but no one has made quite as bold of a claim as Justin Verlander of the Houston Astros.

He said in an interview this past Monday: “Major League Baseball’s turning this game into a joke. They own Rawlings, and you’ve got Manfred up here saying it might be the way they center the pill. If any other $40 billion company bought out a $400 million company and the product changed dramatically, it’s not a guess as to what happened. We all know what happened.” 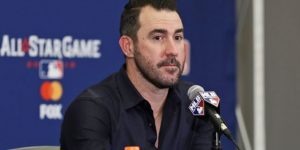 Verlander, who is 36, has allowed a major league-high 26 home runs this season (as of July 10th, 2019), the most he ever has in his career at this point in the season.

His credentials include a Rookie of the Year Trophy, a Cy Young Award (best pitcher from each league AL/NL), an MVP, a Triple Crown (when someone leads the league in 3 different stat categories), A World Series ring/MVP trophy, and he is number 18 on the All-Time Strikeouts list.

MLB Commissioner, Rob Manfred responded by saying that each baseball made in the factory is handmade, and there is room for error. He claims that the MLB isn’t intentionally juicing up balls.

Some (including players), believe that since the start of baseball, the approach at the plate has always been evolving. Today’s approach is to swing for the fences, whereas back in the day that mindset was frowned upon.

Regardless, these are some pretty bold claims coming from one of the league’s current greats. Stay tuned for more on the MLB’s slugfest.