The name Bethany Hamilton should sound familiar if you’ve been following sports for a while.

She is a 29-year-old professional surfer who survived a shark attack at just 13-years-old. In the incident, she lost her left arm, but despite challenges, she continued to shred the waves as early as 2 weeks after that tragic day.

The achievement list goes on and on, with awards like ‘Best Comeback Athlete’ at the 2004 ESPY’s, numerous surfing titles, and a countless amount of TV appearances. One of which was ‘The Amazing Race’, where she placed 25th in one of the hardest races in the country, back in 2014. 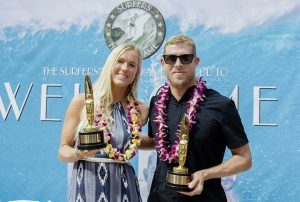 In 2011, a movie titled ‘Soul Surfer’ hit theaters across the nation, where Anna Sophia Robb played Bethany. This time around, she is playing herself in a goosebump-inducing documentary titled ‘Bethany Hamilton: Unstoppable’, and it hits theaters TODAY, July 12th.

She speaks on her challenges overcoming her amputation, and what she hopes people will get out of her documentary. It will be played at many Harkins Theaters locations across the valley.

“One World: Together At Home” hopes to entertain and inspire you Saturday, April 18

“One World: Together At Home” hopes to entertain and inspire you Saturday, April 18