Burgers are one of America’s favorite foods, but there’s a clear winner – and loser – among U.S. burger chains, according to a new survey. The company with the best value and friendliest staff went to … In & Out Burger, followed by Five Guys, and Culver’s. A total of 14 burger joints were included in the customer satisfaction survey. So now that you know the Top 3, who do you think were the Bottom 3? Carls Jr, Burger King, and McDonald’s were the least favorite among meat eaters. 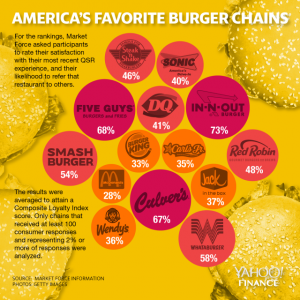