Bebe Rexha… she’s a household name when it comes to Adult Top 40 music. She’s primarily known for her appearance on ‘Meant to Be’ with Florida Georgia Line, but her discography extends all the way until early 2014.

But now, at the age of 29, her brand is ‘too confusing’ according to an executive on her team.

The pop star posted a very lengthy caption along with a sexy photo of herself to her Instagram, claiming that a male executive on her team told her that 29 is ‘too old to be sexy’ and, ‘that’s not what female songwriters do’.

“I’m fed up with being put in a box. I make my own rules. I’m tired of women getting labeled as “hags” when they get old and guys get labeled as sexy with age,” reads part of her caption.

I recently had a MALE music executive tell me that I was getting too old and that my brand was “confusing.” Because… I’m a songwriter and I post sexy pics on my Instagram and that’s not what female songwriters are suppose to do, especially for my age. I’m 29. I’m fed up with being put in a box. I make my own rules. I’m tired of women getting labeled as “hags” when they get old and guys get labeled as sexy with age. Anyways, I’m turning 30 on August 30 and you know what, I’m not running away from it. I’m not gonna lie about my age or sing songs that I feel will sell better because they sound “younger.” I’m gonna celebrate my age because you know what, I’m wiser, I’m stronger and TRUST ME I’m a much better lover than I was 10 years ago.

Bold statement from her team to make.

This isn’t the first time Miss Rexha has spoken out either. Back in January of last year, during Grammy’s season, she was reportedly turned down by multiple fashion designers for her Grammy’s dress because she was ‘too big’.

Im sorry, I had to get this off my chest. If you don’t like my fashion style or my music that’s one thing. But don’t say you can’t dress someone that isn’t a runway size. Empower women to love their bodies instead of making girls and women feel less then by their size. We are beautiful any size! Small or large! Anddddd My size 8 ass is still going to the Grammys. #LOVEYOURBODY

A rant that got rallied support by fellow pop star Demi Lovato.

Applause to her for standing up. Keep killing it Bebe! 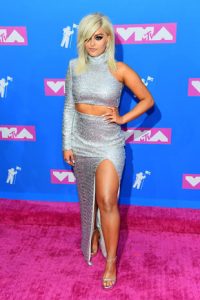 Hi! This is Mateo Valdez, current co-host of the Morning Beat with Steve since April 1st, 2019. Articles seen here can also be heard live at 6:30, 7:30, and 8:30 AM during the Morning Beat every weekday, Monday-Friday.
Friend of The Pulse