That’s right. Former President Barack Obama played varsity basketball at Punahou Prep School in his hometown of Honolulu, Hawaii, and his game-worn home jersey was just sold to a private bidder in Dallas for a whopping $120k. 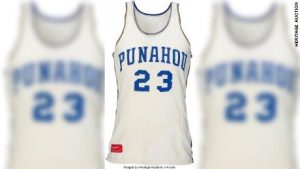 It was sold by a man named Peter Noble, who graduated Punahou just 3 years after Obama. He claims that the school was planning on throwing that year’s batch of jerseys away, and he picked one up hoping to have piece of history from his Alma Mater.

Years later, he saw a photo of number 44 rocking number 23 on the court, which was the same jersey he picked up.

Though Noble got his hands on a piece rare memorabilia from a former President, he joked that he wish he would have gotten a different one.

Despite having the looks of the real thing, a spokesperson from Punahou said that they could confirm whether it’s real.

“We simply cannot make comment on the authenticity of the jersey itself,” they said. “It’s not something we are able to do.”

Despite not being able to confirm it’s authenticity, an unidentified man in Dallas still pulled the trigger on it for $120,000. The starting bid was $43,000

Noble says that a portion of the sale will be going back to the school.

The president has a long history of basketball more notable than his days on the bench for Punahou Prep. This past January, UCLA Legend and ESPN Commentator Bill Walton threw Obama’s name into the hat for the newly-opened head coaching job for the Bruins, claiming that because his brother Craig Robinson coached, it wouldn’t be a stretch of the imagination.

“I’m sticking with Barack Obama until he says no,” he said during a Bruins game this past season.

He also got praise from the King himself, LeBron James after a pickup game in 2012. He went on Ellen after the event and said that he was “very, very good on the basketball court.”

In 2009, he even scored himself a 70’s-themed card from Topps in their non-sports collection. 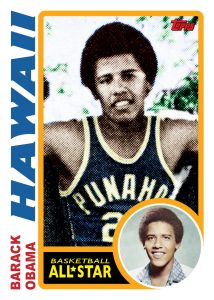 Nonetheless, that’s a pretty expensive jersey for someone who rode the bench in high school…