As of September 18th, 2019, a total of 7 deaths have been linked to the use of e-cigarette products. Hundreds more have fallen ill and been hospitalized. 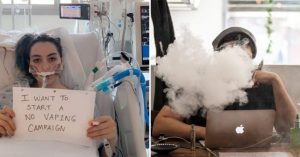 President Donald Trump said in a statement early last week that he wanted to ban the products at the federal level, putting companies like Juul out of business.

New York Governor Andrew Cuomo doesn’t want to wait for the government to act though, as his state becomes the first state in the country to put a ban the use and sale of e-cigarette products.

Mr. Cuomo said in a statement that it was ‘undeniable’ that flavors like bubblegum and cotton candy are deliberately designed to target youths

According to data collected by the DEA reported that 27% of high school students in New York reported using a vaping device of some kind. A 160% increase from the last time the study was conducted. Some critics believe that this number could even  be a lot higher because of the margin of error.

Michigan Governor Gretchen Whitmer ordered a similar ban on flavored electronic smoking devices on September 4th, but the motion has yet to be approved.

No officials from Arizona at any level have made a comment on the issue.

Stay tuned, as the vaping among teenagers conversation continues.